Sometimes You Just Have a Bad Day 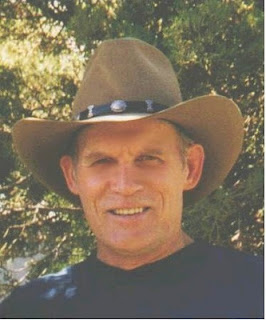 When I first met Jim, he was twenty-two years old, played a guitar, and sang country songs. He heavily favored Buck Owens, Merle Haggard, George Jones, and other old time country greats. Jim had a knack for hearing a song once and being able to sing it perfectly. It never ceased to amaze me that he could learn lyrics so effortlessly.

In the eighties, we began to take annual vacations to the Rockies. One day we walked into a shop in Estes Park where they were playing a version of “Happy Trails” that obviously was not Roy Rodgers and Dale Evans.

“Who is singing that song?” Jim asked the owner of the shop.

It was love at first sound for Jim, and Michael Martin Murphey became his favorite singer. His repertoire now included “Ghost Riders in the Sky,” “Tumbling Tumbleweeds,” and other cowboy songs. One day, he started singing an obscure song, “I Ain’t Had a Good Day” about a cowboy whose day was so bad he was ready to shoot anyone who got in his way and then kick dirt on them. After dementia robbed Jim of the lyrics to many songs, he could remember that one.

Yesterday, I thought about this song. I had a frustrating day at work and on my lunch hour, I checked on the Healthline contest and was dismayed to see that my blog had dropped from second to third. Although my voters rallied, we kept losing ground. Since Early Onset Alzheimer’s blog had been in second for quite some time, I kept noticing my voters voting for the second place blog…which was a different one than they intended.

The day wore on, just getting worse on all fronts. I was about to the meltdown point when the workday ended. I was the last one out the door and saw the day’s mail still on the shelf. I thought I had time to take it to the post office and still make it to my granddaughter’s basketball game.

Okay, had I not taken the mail, I wouldn’t have been on Broadway at all. I left the post office, fastened my seatbelt, drove the correct direction on the one-way street, stopped at all stop signs, signaled my turns even when no one was around, stopped at the light and made a right turn onto Broadway driving the speed limit. Obeying each and every law as far as I could tell. So why did the city police officer turn on his lights? Yep. He must mean me, so I found a side street and pulled over.

“Ma’am, you were driving on the white line,” he said. I must have had a blank look on my face because he said, “The one on the right side of the street.”

Okay. As I dug out my driver’s license and insurance card, I told him, “I’ve not been having a good day.” And now, it just went from bad to worse. Getting stopped for driving on my side of the road, what’s up with that? Was he afraid I was going to mess up the paint job? If they had those little rumble strips, I’d have known I was touching the white line.

“I’m going to accept this insurance card although it’s expired.” This whole insurance card thing annoys me. They can check everything else with your driver’s license, why can’t they put insurance info on their computers? I’ve had insurance with the same company, without a single lapse, for the past forty years. So why do I have to keep changing those cards?

After the delay, no ticket, I made it to the ballgame on time. All parking lots were jam-packed. I found a back parking lot, which not only was full, a truck was blocking the road out of the lot. Now, he deserved a ticket! I was able to drive off the pavement to get out of the lot. My first break of the day happened then as someone backed out of a parking place.

Once I was inside the gym, I found my son and daughter-in-law. I couldn’t help but repeat the words Jim so often sang and greeted them with, “I’m telling you friends, I ain’t had a good day.” And, I sincerely meant it.

Don't you just hate it when you get stopped for the most minor of things & then, not 10 minutes later, you see a ton of people who should have gotten stopped way before you did??!! *bleh*

Hope your day is better tomorrow!!

Exactly right! I see people doing things all the time that I think they should be stopped for, but oh, no. Doesn't happen.

Thanks, Andrea, hope you have a great day too!