One of These Things 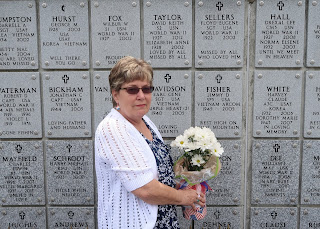 When I first started elementary school, our workbook had pictures of objects, and the assignment was to choose the one that was different and did not belong. We would color the pictures and circle the one that wasn’t the same. Later, Sesame Street brought the fun to TV with a song of encouragement. Now, almost daily, I see a screen of numbers or letters and the caption, “It will take a genius…” to figure out, for example, which one of the numbers is an 8 instead of a 9. I’m thinking it doesn’t take a genius to know that you are not a genius just because you spot the one that is different.

I’ve seen two things in the last week that stood out from the norm and were obviously different. First, I was walking the dog one night and heard a rumbling sound as we walked down the driveway that I couldn’t identify. Even the dog was looking around to see what it was. I looked up at the bright twinkling stars and clear sky and couldn’t see anything that would be making the noise.

I walked the dog up the driveway, turned around, and headed back toward the highway. All of a sudden, a low hanging cloud moved swiftly across the sky. The odd shaped cloud barely cleared the apple tree in our yard. At first I thought it was smoke, but I couldn’t smell it and there seemed to be no origin. To be honest, it looked creepy and when I turned my back on it to head toward the house, I felt prickles run across my scalp and had the feeling someone was watching me.

The next odd thing I saw was at the Veterans Cemetery when my son, sister-in-law, and I took flowers to place in front of Jim’s niche. After we placed the flowers, we enjoyed the peaceful beauty of the cemetery. Rob and I walked away from the columbarium toward the headstones. There, not too far from the road, but several feet from the graves, was a vase of artificial flowers with a partially deflated helium balloon attached. It was stuck in the ground and looked pretty much like a fancy lawn dart. We speculated as to why the floral arrangement was in such an odd place. They weren’t the same as all the other flowers placed on the graves.

We sometimes see an anomaly among our fellow human beings. Some people are just different from the others. Since we are all unique, a certain amount of difference is expected.

Jim was one of those rare individuals who marched to his own drum, and did not believe in blindly following the norm. His ideas and beliefs were often delightfully imaginative, and at the same time, his stubbornness could be maddening.

Life can become so mundane and routine that we tend to expect sameness and may not notice when things are unusual. Still, the day Jim forgot his social security number and birth date was the day I realized something was different and that nothing would ever be the same. Later, I tried to remember other clues that indicated  the horrible disease that was just beginning to unfold. I couldn’t think of anything that seemed to be outside the norm. Once alerted,  I began to notice glitches in his thinking, his abilities, and his personality. The differences seemed to snowball, steadily going downhill and picking up speed.

It was nearly a year before others began to notice Jim’s problems. Up until then, I think they thought I was exaggerating, or that I was the one with a problem.

Yes, we often see things that are different, but instead of really noticing them, they blend in with the minutiae of everyday life. Some differences that come out of a clear blue sky, or are stuck into a grassy knoll, make no impact on the grand scheme of things. But differences that occur in the 100 billion brain cells of someone you love are life changing. 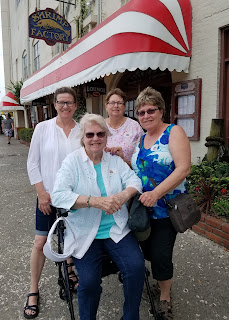 I just went on a nine-day vacation with my mom and sisters—our Girls Trip 2019. We had a relaxing time in both the mountains and on the beach. Nine days without thinking about obligations brings to mind that…

Life Is Good: In Savannah, GA, we took a trolley tour of old Savannah. Our one stop was at the Riverwalk. We ate lunch at the Shrimp Factory and visited a couple of shops. One of them, Fannie’s Your Aunt, offered Life Is Good t-shirts. I found two that caught my eye and both had to do with music. Since I’ve joined the Capps Family Band, I practice my songs while I walk the dog. Did you know that singing lowers stress and helps with mental health? Singing also boosts memory.

Life Is Exasperating: Back home, life settled into the normal routine. Get up, take the dog out, fix breakfast, clean up, etc., etc. Most of all, I spent hours and hours trying to catch up on all the work I skipped out on while enjoying my vacation. Isn’t that the downside of vacation? I’ve never had those little elves come in and do my work while I’m out of town.

Life Is Predictable: I can’t help but notice that life is predictable. I can always count on the predictability of a normal day. The sun comes up every morning in the east and sets in the west. It rains from time-to-time, usually when we need to do outside work, and the grass grows faster than we can cut it. This was going to be the year we kept ahead of it—until it rained and rained and rained. We can’t mow our lawn when the yard has the squishiness of a rice paddy.

Life Is Scary: It’s hard to go through a very long period without a heart-stopping close call on the highway. There’s nothing quite as fun as topping a hill and seeing cars headed your way in both lanes. Even in the safety of my home, I’ve had a few scares—one as recently as this morning. I was cooking breakfast and sipping my coffee while I watched the sausage brown. Normal early morning…until…I realized the kitchen was filling up with smoke. I turned around and smoke billowed from beneath the cabinets and along the countertop. I opened cabinet doors although I couldn’t figure out how a fire could start in the cabinets.

“Harold, Harold!” I yelled. “There’s smoke everywhere and I can’t figure out where it’s coming from!” He came into the kitchen, looked around, calmly, which by-the-way was totally irritating when I was in a panic. He reached over and unplugged the toaster where our normally pale toast that has to be pushed down twice was completely charred.

Life Is Mysterious: I could regale you with stories of mysterious events in my life, but that would be a book of its own. Just this week, I was washing dishes and began to sing “Que Sera Sera,” which to be honest, I hadn’t even thought of in years. The next day, Doris Day passed away. Just a little odd, I thought. Last night, Harold was watching an old Law and Order rerun on the TV in the bedroom, and I decided to catch up on the pile of newspapers I hadn’t read. I sat down on the couch in our kitchen and picked up a random newspaper. An article about the measles caught my eye. As I began to read, I could hear the medical examiner on the TV program “testifying” about how a child had died from the measles. As I read the next two lines, I was reading the words she was using to testify. That was mysterious and a little bit creepy.

Life Is Not Fair: I always try to be fair, but there isn’t too much fair about life. Good people have terrible things happen to them and bad people have prosperity and lead charmed lives. That’s just the way it goes. Jim was a good person and certainly did not deserve to have a horrible disease that robbed him of his most precious memories.