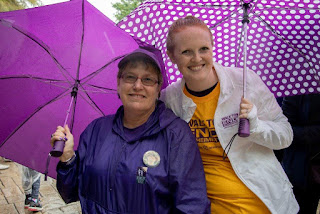 On this cloudy, rainy August day, I thought about the Henry Wadsworth Longfellow quote, “Into each life, some rain must fall.” It seems that sometimes the rain falls harder than it does at other times.

Last year, our Walk to End Alzheimer’s was during a steady downpour. We had rain at previous walks, but never a constant deluge like last year. Although the Highway Gardens at the Missouri State Fairgrounds is a lovely place to hold our walk, the grounds turned into a mud pit. Tents and tables sank into the mud and turned over. I couldn’t take my books out of the tubs.

Although, we handled the weather as well as could be expected, it inspired us to get off our keisters and look for a location that had some shelter. This year, for the first time, we chose Centennial Park and a different weekend.

When you hold an annual outdoor event, it isn’t a matter of if it will rain on that special day, but when it will rain. The same holds true for life. Rain happens.

Gully washers happen during our darkest moments. We hear the rolling thunder and feel sharp pangs of lightning bolts when they strike our hearts. Clouds seem to hang over our heads blocking out the sunshine that should warm our souls. Flash floods threaten to wash away our optimism and feelings of self worth.

Then we have the steady downpours. Just when we think we’re between showers, it starts up again soaking us to the bone. Then a cold wind blows away our defenses and we might as well be naked as wrapped in wet garments. We get to the point where we just can’t take anymore. At some point, a little droplet of rain can be the tipping point.

A half hour isn’t long and most of us can remain optimistic for that length of time. Life is different degrees of rain, but rain is essential to life. 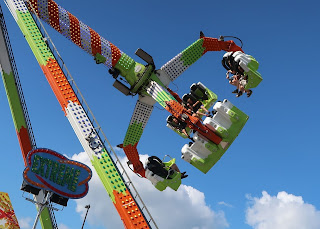 Each year the Missouri State Fair has a theme, and this year’s theme “Come Home” is thought provoking. Since I live a few short miles from the State Fair City, I just need to drive across town to “come home” to the fair.

Like many people in Sedalia, I’m not that thrilled about the fair. Oh, yes, I’ve enjoyed concerts, walking through the exhibits, working at the Missouri Coop Building, and have spent countless hours on the midway while I kept an eye on the young ones in the family. I have great memories, good memories, and wish-I-was-home-under-the-air-conditioner memories.

The first night of the fair this year was pleasant, but I was too exhausted to consider going. Since then, the weather has ranged from hot to bake-a-cake hot. Then, there’s the occasional thunderstorm. Oh, yes, we can be in the middle of a drought, but you can count on rain during the fair.

One of the first things that crossed my mind with “Come Home” was the exact feeling I always had when Jim and I drove into Estes Park. We went to Rocky Mountain National Park each year, and although some things changed from year-to-year, the predominant emotion was a sense of homecoming.

Along with the eventual changes in Estes Park were the inevitable changes in Jim. Our first trips, we spent camping, hiking, and going to the Lazy-B Ranch for music and a delicious meal. The last few times, we stayed in a cabin, and I watched Jim lose the ability to camp and hike. It was the end of an era for us.

While Jim was in the nursing home, I made a trip to Estes Park with my mom, sister, and sister-in-law. I hadn’t been to the mountains for several years. It was like coming home to a different house. Everything had changed so much physically and emotionally. Several of my favorite shops had closed, the visitor’s center had grown into a huge hub of activity, and the Lazy-B Ranch was no longer in existence. I didn’t have Jim to cook a campfire breakfast, to sneak treats to “Chubby” the chipmunk, or to sit around the campfire and tell tall tales.

We all know that everything changes through the years, even our home. We may long for the familiar home of our memories and to see loved ones who live in the homes of our hearts, but are no longer with us.

Home is where our stories began and where we became who we are. It doesn’t matter if we lived in a shack long ago and now live in a mansion. There is a chunk of our being that is wrapped in the recollections of our beginnings.

Home. The word isn’t just any old word. Home is a word that entails a visual image in 3-D, complete with smells and sounds. Memories of home can be good or bad for a lot of reasons. Regardless, it is a big part of each of us. The lessons we learn from our parents mingle with our DNA to mold us into the adults we become later in life.

Not Its Intended Use 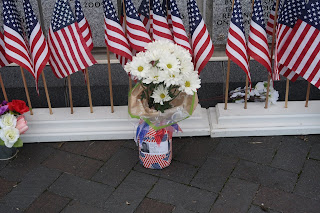 A few years ago, we received a microwave popcorn popper as a door prize at an annual meeting. The first time we tried to pop corn, the top melted and the popcorn was charred. Since it didn’t work, I prepared to dump it in the trash.

“Keep it,” my husband, the farmer, said. “We might be able to use it for something else.” I threw away the melted lid and kept the bottom part, against my better judgment. I saw the plastic bowl with a handle as a waste of space. Even as a popcorn popper, I didn’t see much use for it since I can’t eat popcorn.

Oddly enough, we use the plastic bowl almost daily for scraps and vegetable peelings. When we start preparing a meal, one of us will say, “I need the plastic bowl.” Although not its intended use, it is our most used kitchen container.

Every Memorial Day, I search for a plastic vase to take fresh flowers to the Veterans Cemetery. For the unaware, it is practically impossible to find a plastic vase. My husband came up with the idea of cutting the top off a Simply Apple juice bottle and wrapping it in patriotic duck tape. Not its intended use, but it works.

Sometimes medication can be used for a different purpose, called off-label use. It takes years to develop and test medication, but when a drug can be used for more than one condition, it dramatically shortens the time to get the drug to consumers.

One of the off-label uses for the  Alzheimer’s drug Memantine (Nameda) is for it to be added to the standard therapy used to treat obsessive-compulsive disorder (OCD) and attention deficit order (ADHD).

Antipsychotic drugs are often used off label to treat the symptoms of Alzheimer’s. One of the common drugs used is Seroquel. Another off label use for Seroquel is for Insomnia.

I believe more caution should be used in prescribing antipsychotic drugs to people with Alzheimer’s. Jim had some serious reactions to them. Seroquel was commonly prescribed to residents in the Alzheimer’s unit. They tried it on Jim and instead of calming him, it made him hyperactive. Other psychotic drugs caused him to be angry and out of control. One even caused so much foam coming out of his mouth that he couldn’t eat or drink. The physicians treating him swore they had never seen that reaction before.

Although commonly used in people with dementia, antipsychotics increase the risk of death and decrease the quality of life. While looking for a home for Jim, I visited one home where the Alzheimer’s residents appeared to be in a stupor. I thought it odd at the time, but after seeing how antipsychotic drugs affect most people with dementia, I’m sure they were overmedicated.

Not all drugs used off-label are bad. Many years go into the development of prescription drugs and off-label use of an approved drug can bring relief to a patient, or even be life-saving. For example, some cancer drugs are approved for one type of cancer, but may successfully treat a different type. Chemotherapy treatments are often a combination of drugs that fight more than one type of cancer.

Sometimes, veering from the intended purpose can be successful, and sometimes it can create problems. Antipsychotic drugs for people with dementia can be life-threatening and more harmful than helpful. Using a popcorn popper for a receptacle for scraps is handy and safe—in fact, safer than using it in the microwave!