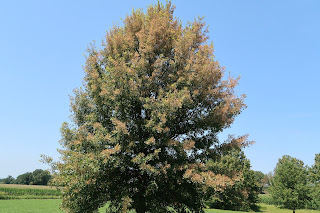 For Those Who Wait 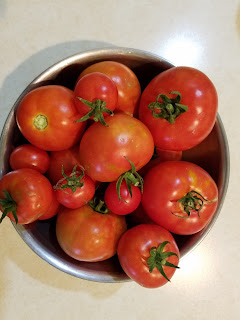 We didn’t get any decent tomatoes all summer long. Harold left for town this morning and gave me a call. “We have three or four semi-ripe tomatoes.”

“Okay, I’ll go out and pick them,” I said. I walked out to the potted tomato plants expecting to pick a few and bring them inside. Ripe tomatoes were everywhere. The saying, “Good things come to those who wait” popped into my head.

You wouldn’t think that I’d even think of this expression since patience is not one of my virtues. Sure, I have a lot of good qualities: empathy, a good work ethic, general optimism, and so forth. Patience does not make that list. Nope, not even as an afterthought.

My lack of patience gets me into trouble sometimes. I get really frustrated when I’m trying to open a file on the internet. I absolutely hate waiting for that little circle to stop spinning. Or for an ad to pop up and obstruct my view. Life is too short to wait, and wait, and wait. Often, I’ll just close it and figure that I didn’t really need to know the latest “shock and awe” news story.

Patience. I know men don’t usually have any patience, but everyone expects a woman to have it. I used to have a certain amount of patience, but I guess years of budgeting my time has zapped what was left of it.

My saving grace is stubbornness, or bull-headedness if you ask certain people. When I don’t have the patience to complete a task, I’m stubborn enough to see it through.

I’m starting to lose patience with a cure for Alzheimer’s. People die every day from Alzheimer’s and related dementias. We can’t find a cure soon enough to suit me. I can’t wait for the first survivor.

We thought about that first survivor at the Walk to End Alzheimer’s this year. During the opening ceremony, we hold high pinwheel flowers in various colors to represent the walker’s connection to the disease.

I always choose a purple flower because I’ve lost someone to the disease. Yellow is the color for caregivers, blue for those who have the disease, and orange for those who are supporters. This year, a new flower was introduced. Two young children held up the white flower that represented our hope for the future. The white flower is for the first survivor. That person does not exist at this time.

After the ceremony, they gave me one of the white flowers. I hope before much more time passes, I can take the white pinwheel back to the walk and personally hand it to the first survivor in our town. I hope to see our walk filled with white pinwheel flowers.

No, I will not patiently wait for the first survivor. I’m going to be walking, advocating for more research funds, and doing all I possibly can to push, cajole, and become the squeaky wheel.

Patience is not one of my virtues. I might as well make the most of my shortcoming. 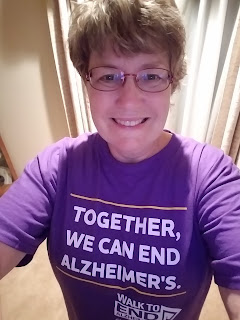 Saturday was my twentieth Alzheimer’s Walk.

In 1998 the year of my first walk, four troublesome years had passed from the time I had noticed Jim was having trouble remembering basic information. Jim had always had an amazing recall for numbers and dates, but had forgotten his social security number. I thought that strange, but I didn’t push the panic button until he admitted he didn’t know his birth date either.

After testing, it was determined that Jim had dementia of the Alzheimer’s type. Jim, of course, insisted he didn’t have “that,” as he referred to it, but when we saw an article about an upcoming “Memory Walk” in Sedalia, he wanted to go. “I have memory problems,” he said. I had already signed up for the walk and had raised some money, but since Jim didn’t have “that” I thought he wouldn’t want to go.

We arrived at the first walk to discover we were the only people from Sedalia. The other walkers were Helen and Chuck from Slater, Joetta and Penny from the Alzheimer’s chapter office in Columbia, and Penny’s dog, Victoria. Six people and a dog, and I knew all their names—including the dog.

Saturday, was a different story. More than three-hundred walkers and thirty-six teams crowded into the highway gardens. We had professional DJ’s, a super sound system, corporate sponsor booths, volunteer shirts, a professional photographer, and pinwheel flowers. We even had an official playlist of songs. At the first walk, the closest thing we had to music was Helen’s hunting horn. The highlight of the walk was going into the VFW where a veteran asked Helen to blow her horn. After she blew her horn, they took up a collection to add to the walk total. The grand total was $600, almost all of which I had collected from co-workers and friends. 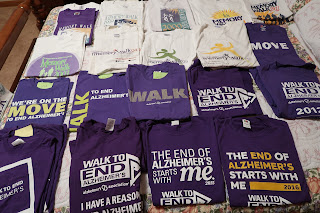 To make my twentieth walk special, I wore my 1998 shirt and my team wore the 1999 - 2017 shirts. We knew they weren’t exactly vintage shirts, but my niece and I laughed about struggling not to call them vintage. Old, I guess was the correct terminology.

Yesterday, Facebook posted a “memory” from twelve years ago, September 10, 2005. My son, daughter-in-law and their two kids were at the Memory Walk wearing 2005 shirts. I smiled at how small the grandkids were, and then I realized that was how small they were when Jim died earlier that same year. It made me incredibly sad to realize that they lost their grandpa at such a young age, and Jim missed out on seeing his grandkids grow up. Family was everything to Jim. He loved being a dad and was over the moon about being a grandpa. 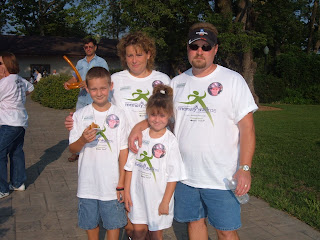 It’s hard to believe that I’ve been doing what I’ve been doing for twenty years. I logged my shirts before I took them to the walk to make sure that all the years were covered. Some of the shirts did not have a year and I had to look at photos to determine which years went with which shirts. Then, I identified the shirt by what it said: Move; We’re on the Move; WALK (in Alzheimer’s Logo).

After the walk changed from the Memory Walk to the Walk to End Alzheimer’s, the message on the shirt conveyed increasingly positive meanings. The 2017 shirt, Together We Can End Alzheimer’s, told its own story. When we work together, we can change impossible to possible.