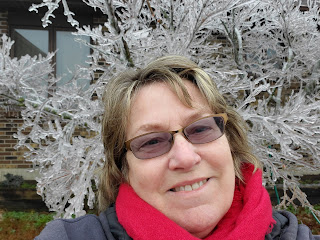 We started the New Year in the dark. An ice storm had hit during the sleeping hours, and when I woke up at 5:30 in the morning the lamp flashed off and on, then off. Our emergency lighting came on. I immediately called the electric cooperative to report the outage.

In that moment, I regretted that we still did not have an automatic switch on our generator. The generator shed was practically in the yard, but with a layer of ice, neither one of us was capable of traipsing across the yard to light the dark.

At daylight, we called for reinforcements, and Harold’s cousin came and flipped the switch. Our neighbor who used to tell us when the electricity came back on has a generator too. Through our conversation with the neighbor, we learned that the cooperative had an app for that.

Ice is a good example of treacherous beauty. Looking out at the glistening trees and icicles from a warm house is a feast for the eyes. Trying to drive on slick roads, or to walk on an icy sidewalk, is dicey.

I’m not ashamed to admit that I used to be petrified to drive on ice. One time when Jim was in the early stages of dementia, I had him drive me to work. I trusted his driving much more than mine. I eventually learned to navigate the car on ice-covered roads, but it made me nervous. The first hurdle was getting up enough speed to go up the grade to the east. Sometimes, the best plan was to head west and go down into the dip and up the hill.

I’ve spent my life trying to light the dark. Even during the darkest times of dementia, I sought the bright moments—when Jim’s eyes lit up when I walked in his door at the nursing home, when the shower went well and he enjoyed the Rubber Ducky song, or the rare times he spoke.

The past year was filled with personal darkness. I lost two beloved sisters-in-law and a brother-in-law. I lost friends and saw other friends cope with their own dark days. We grieved together, and we found the strength to live with the loss and walked into the light together.

Our country has fallen into dark days. We’ve watched in horror as the pandemic has swept across our nation, sowing denial and harvesting lives. Covid-19 claimed the lives of celebrities, and more painfully, our relatives, friends, and neighbors.

We are a country divided. Too many choose politics over family, extremism over reasonableness, hate over love, conspiracy over unity, and unfortunately darkness over light. Polarized social media and opinion news programs have further divided us. Each of them preaches to the choir inciting distrust and violence.

For those of us who lived through the sixties, we’ve seen this before. The Vietnam War was a huge divider in this country. It was a life, death, and patriotic struggle. The war ended and eventually, the country healed.

I don’t know about you, but I don’t want to live in the darkness of disease and civil unrest. The only way out of this darkness is to keep moving toward the light.