No matter how lost you are, music can bring you home 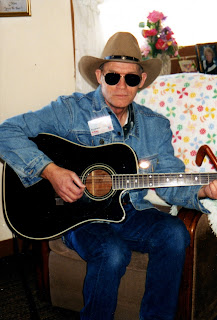 “No matter how lost you are, music can bring you home.” ~ Unattributed

Music touches our souls and brings back memories. Jim called playing his guitar therapy. And it was. He kept the guitar on a stand in our kitchen. Each morning he picked it up, looked out the window at his mother’s house, the road, and cattle in the pasture, then played a few tunes. He’d drink a cup of hot coffee—no lukewarm stuff for him—and sing whatever country or cowboy song was on his mind, or heart, that morning.

From the time he was a boy and learned how to play the mandolin, the only instrument his tiny fingers could reach, until the day he died, music was in his soul. One of the saddest parts of dementia was watching Jim lose his ability to play his guitar and sing his songs. To this day when I hear one of his favorite songs, memories of Jim, sitting in the kitchen strumming his guitar, soothes my soul.

Early Onset Alzheimer’s blog is a tribute to Jim, our journey, and a way to reach out to others who know the heartbreaking loss of dementia. Healthline’s contest is nearing an end. The final tally will come in a few days, but I want you to know that we are already winners. Whether we win the top prize, or not, we’ve made our voices heard all over the Internet. Spread the word, Alzheimer’s is a priority to us, and we want to end it NOW.