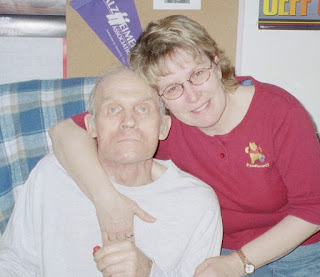 Excerpt from “Indelible” (memoir in progress):

“I brought balloons for our anniversary,” I said, and he smiled. One had a yellow smiley face with kisses on it, and the other said “Happy Anniversary.”

“Today is our thirty-fifth anniversary,” I said. “We sure were young then.”

He looked at me like he didn’t have a clue what I was talking about, but he liked the balloons. I put the balloons close to the fiber optic tree I bought him earlier in December.

Jim leaned back in his recliner and turned his head to watch the tree. He looked at the tree, the balloons, and then at me as if he wanted to say something. He moved his mouth like he was going to talk, but no sound came out.
I sang some Christmas songs to him and he seemed to understand what I was singing.

“I’m trying to get him to say Rudolph,” I told the aides when they came in his room.

“If you get him to say ‘Rudolph’ we will bow down to you,” one of them said.

The aides left and two of the residents came in with the name cards from their dinner trays. They handed the cards to me and one of them said, “Will you take our tickets so that we can get a room tonight?”

“You already have a room,” I said.

“No, we don’t have rooms, but we have tickets,” she said, “We just need to figure out who to give the ticket to.” I handed them back their “tickets” and they wandered away in search of someone who would give them a room for the night.

An elderly gentleman walked down the hallway, stopped in the doorway, and said, “Hello ma’am. How are you? Merry Christmas!”

“All I want for Christmas is a Cadillac,” he said.

“I guess we could all wish for that for Christmas,” I said.

“Good night, Ma’am!” He turned around and headed back the way he came from. I didn’t recognize him and had been trying to decide if he was a visitor or a new resident. He was dressed a little oddly, but seemed with it intellectually. I thought that maybe he was a resident by the way he stopped, turned around, and went back.

I began to feed Jim, and he ate pretty well, but he choked when I was about finished. I stayed for a while longer to make sure he was okay. I put his recliner in a more upright position and moved the balloons and card to his tray.

Jim was looking at the balloons. I was surprised they had held his attention that long. At least he was looking at his surroundings. Sometimes he wouldn’t look at anything.

I kissed him goodbye. The lump in my throat made the words come out in a whisper, “I love you sweetheart. Happy anniversary.”