The Quiet of Dawn; the Hush of Evening 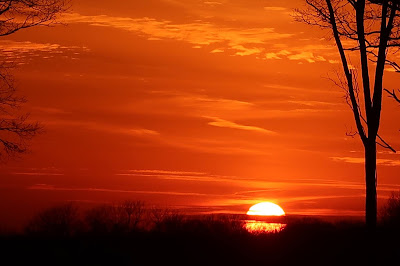 My morning routine is to pour a cup of coffee and either read or play games on my Kindle. When I’m interrupted before I finish my first cup, my entire day is out of kilter.

I love the quiet of an early morning so much that I am the first one out of bed. After my (hopefully) uninterrupted quiet time, I start the multitude of daily chores. It seems that I always have more to do than time to do it. Sometimes, I decide that there’s nothing I’d rather do than read a book, watch a movie on Prime, or talk to my mom.

Time: my enemy, my friend. Life is short and time is limited. How we make use of time can make us feel like a superhero or a zero. We have to remember that superheroes usually have an unassuming human persona. No matter how much needs to be done, there’s always tomorrow. Or not. If there is no tomorrow, would you want to spend your last day on earth finishing a routine, mundane task?

During the caregiving years, I was often overwhelmed by the loneliness, the sheer workload of providing care for another human being, the fear of the future, and the loss of the past. I sometimes felt like I was plugging along with superpower pushing me forward one day at a time. Other times, I felt like I was smothering beneath the weight of responsibility.

Like the rising sun, the light would break the darkness. I found daily strength drinking a cup of coffee, or watching the squirrels jump from limb to limb and tree to tree while spending a quiet moment communing with my inner self. The harshness of caregiving was tempered by the tenderness of love, caring, and hope that time would be kind enough to slow down the losses.

Like most caregivers, I learned to forge moments of joy into each day any way I could. Jim and I would go for a ride with the windows down, or walk in the park drinking milkshakes from Dairy Queen without worrying about the sugar or calories.

After a busy day of obligations, I like to enjoy the hush of evening. As the sun sinks, there is a perfect moment when the colors are glorious. Sunset is the most beautiful time of day and the most precious time of life.

Walk to End Alzheimer’s: Musical Shelters and Miles to Go 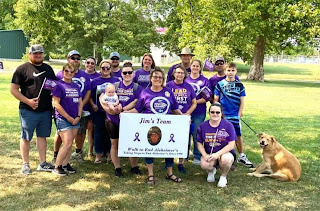 Last year the Alzheimer’s Association launched “Walk Everywhere.” We were excited to hold this year’s Sedalia Walk to End Alzheimer’s in person. The goal was for participants to feel safe and enjoy the excitement of being part of a community event.

This was my twenty-fourth walk, and I’ve seen just about everything that could happen, happen. One year we discovered within days of the event, that we didn’t have the Highway Gardens secured. After nearly having a panic attack, I felt so fortunate that some unlucky couple called off their wedding.

We’ve walked on mostly glorious sunshiny days, but we’ve also walked on cold September mornings, in sweltering weather, and during rain showers. Nothing compared to the deluge we faced in 2018. We slogged through the mud during setup, through the opening ceremony, and throughout the walk. It never once let up, and I was soaked from head to toe. In 2019, we changed the venue to Centennial Park with a walking trail and a large shelter.

After the 2020 virtual walk, we moved forward with plans for an in-person walk. An important part of any walk is logistics. I met Laura, our Alzheimer’s Association Walk Manager, at the park and we finalized the logistics at the big shelter. That afternoon we had the figurative rug swept out from under our feet. Laura received an email that said “sorry for the miscommunication” but Shelter 1 has been rented to someone else. Say what?

After one-sided negotiation, we were offered Shelters 3 & 4 for our event. I looked the area over and told Laura we could make it work. We knew the walk would be smaller than in the past. We had another logistics meeting at the new location and strategized a Plan B.

On walk day, I arrived at the Park around eleven o’clock a man was sitting in Shelter 3. “That man said he rented the shelter a year ago,” WyAnn told me. After looking around, we discovered Shelter 5 was reserved for us. Plan C was on the fly, but worked out nicely. We had more room between the shelters, and a lot of shade! Musical shelters worked out to our advantage.

The wind played havoc with the pinwheel flowers, signs would not stay upright, and I found one of my books blown onto the grass. The wind was both a curse and a blessing. The day did not seem nearly as hot as the thermometer said it was.

As soon as a team arrived, they would be encouraged to walk. I had asked Jim’s Team to be ready to walk at 1:30. After our team photo, sixteen of us hit the trail right on schedule. If my mother had been able to make it, we would have had a five-generation photo. My great-grandson Jackson was decked out in his “Walk to End Alzheimer’s” baby T-shirt. On the back, it said “Grandpa Jim’s Team.” The $555 online donations made him a “Champion.” As of walk day, Jim’s Team had raised the most funds, but we were still short of our team goal.

Although the Sedalia Walk had four Grand Champions ($1000 or more) and our tiny Champion, we fell thousands of dollars short of our walk goal. Hopefully, onsite donations and continuing online donations will eventually get us there, but we obviously have miles to go!

We have until the end of the year to meet our goal, Sedalia. I’m going to keep on fundraising and I hope you will too. If you haven’t had a chance to donate, you can make an online donation at alz.org/sedaliawalk.

Those who have never been to a walk may not realize how uplifting and heart fulfilling it is to gather for a common purpose. We share the hope and confidence that we will someday have a survivor lift the white flower and hold it high.