Chasing After the Wind 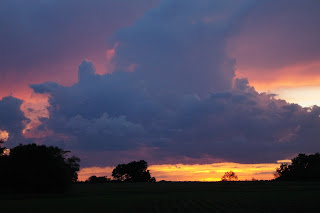 Sometimes I’m in the right place at the right time to hear a message that resonates with me. That message may be at a high-priced conference in some exotic locale, or it could be in my hometown during one of Pastor Jim Downing’s sermons.

Sunday morning, he prefaced his sermon with the thought that it might be one of the most important messages he would ever give. I don’t remember his exact words, but he gave his self-depreciating smile, and said we might be thinking, “Nice words, preacher” and just go on our way and side-step the importance of the message.

His message was based on Ecclesiastes 4:6 “Better one handful with tranquility than two handfuls with toil and chasing after the wind.” We seem to think that more is better, but is it?

When I was growing up in a family of eight, we learned that it wasn’t necessary to have a lot of material possessions to get by. Mom and Dad bought us school supplies and clothes at the beginning of the year. I had a few dresses to wear and one pair of school shoes. We always had the box of sixteen crayons, not the giant boxes some of the other kids had. Funny thing was, I still received the same education.

I had two dolls and not a lot of other toys. Mom always saw that I had books to read. She ordered a children’s version of Reader’s Digest Condensed Books. Through those books, the world of adventure opened to me. One of the first stories I read was “Little House in the Big Woods.” I loved it! I was reading about a girl like me that didn’t have much, but enjoyed every moment of being a kid.

After I became a grownup, my life has run the gamut from lying awake at night trying to figure out how we were going to pay the bills to the abundance of today. I worked more than three decades to be able to afford enough clothing to outfit a small nation and enough shoes to earn the nickname Imelda Marcos Junior. I have collections to the point of almost having collections of collections.

Which brings us to the first of three of Pastor Jim’s suggestions, “throw out.” I’ve been doing some of that with bags of clothes and shoes I’ve taken to Open Door. I know I have to get more serious about paring down on the overload of material possessions.

Pastor Jim hasn’t channeled into my internal self, so obviously, I’m not the only one with a crazy busy schedule. My calendar is often double or triple booked. I’m so over stretched that I have reminders of my reminders. “Cut back,” he said. Cut back on schedules. If I look through my calendar I can see things I want to do, but those are often pushed aside for something I feel obligated to do. I’m retired but, by golly, that doesn’t seem to give me a lot more time. My days are full and often hectic. I haven’t found time to write for months and months. Not. One. Story.

Perhaps, part of my time crunch comes from the interruptions of emails, phone calls, social media, Google, and that feeling of constantly being connected. Let’s face it…if I forget my phone on a simple trip to town, I’ll turn around and get it. My smart phone is like carrying a home office with me everywhere I go. It dings, buzzes, and even whistles at me.

“Turn off,” Pastor Jim said. He has a really good point. How do you relax when you are at the beck and call of, well, just about everyone? Not only people you know, but also people you don’t know. How the heck did that happen?

By de-cluttering our lives, we have more time to enjoy life’s breathtaking moments. We have time to look at a beautiful sunset and admire the way the clouds form in the sky. I remember my brother Donnie and I playing, “What does that cloud look like?” We saw angels, ships, faces, and all kinds of goofy things in the clouds. Now if I look at a cloud, I might see the possibility of rain, but it’s been years since I studied the clouds and tried to picture an object.

I’ve been under the misguided notion that’s just the way life is now-a-days. It doesn’t have to be. Is it possible for me to throw out, cut back, and turn off? I’ve been much too busy chasing the wind to enjoy a mere handful of tranquility.

Copyright © May 2015 by L.S. Fisher
http://earlyonset.blogspot.com