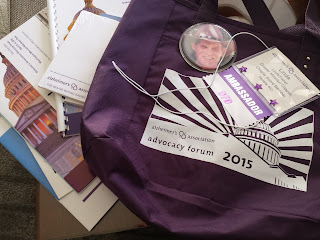 Purple is my favorite color, and coincidentally, it is the Alzheimer’s movement color too. June is Alzheimer’s and Brain Awareness Month and an ideal time to deck out in purple.

I signed the purple pledge and changed my Facebook profile photo to the “END ALZ” logo. The pledge is to wear purple gear on June 21, the Longest Day, and throughout the month of June.

The “Longest Day” ties well to Alzheimer’s. As any caregiver can attest, some days are not just long—they are endless. Alzheimer’s is an equal opportunity disease affecting people like you and me and creeping into the ranks of the famous.

It was interesting to see that the cast of  “The Big Bang Theory” have joined the fight against Alzheimer’s. Along with other well-known celebrities, they performed at “A Night at Sardi’s” to benefit Alzheimer’s. They were joined by Joey McIntyre, singer/songwriter and a member of New Kids on the Block. The fight is personal to Joey since his mother recently lost her battle with Alzheimer’s. He said, “Mourning is a process, and I have to take my time with it.”

Alzheimer’s can bring families together, and it can tear them apart. Or both. When Glen Campbell announced he had Alzheimer’s, his family was admired for the way they rallied around him. Due to his family’s support, Glen was able to perform well after he had the disease. Eventually, he wound up in long-term care. Now the family is at odds with his fourth and present wife, Kim. His children from previous marriages claim Kim Campbell has barred them from seeing their father, failing to provide Glenn with basic personal care items, and being financially irresponsible. Some of his children are trying to get a judge to appoint a guardian to protect his interests.

Often family members disagree on how to provide excellent care for the individual with Alzheimer’s. They fuss and fight, and before you know it, they become more focused on having their own way than what is really and truly the best resolution to their quandary.

The more you learn about the disease, the more likely you are to make good decisions. The primary care partner will experience a different level of stress and angst than the occasional visitor. Until you walk in their shoes, be very, very careful about criticizing. This isn’t to say that everyone is cut out to be a caregiver. Some aren’t. Unless you are willing and able to step in full-time, proceed with caution. As long as your loved one is not in danger or neglected, be supportive. Be a part of the solution instead of adding to the problems.

Share your stories, your experiences, and show your support for caregivers and people with the disease. Create awareness with the color purple!

My goal is to wear purple every day in June. This is an easy goal for me since I have a wardrobe rich in purple, even without considering all the purple walk shirts I’ve accumulated over the years. Just in case I get up and forget to don my Alzheimer’s gear, my fingernails and toenails are both polished purple. My toenails have the addition of a layer of sparkle.

Sparkle on the nails makes them look darned cool, but it is a real chore to remove it. That’s when I have to drag out the super-duper polish remover pads and sometimes finish with a bottle of remover. If only we could remove Alzheimer’s from the face of the earth as if it were a thin layer of polish!

We want to turn the world purple in support of the 47 million people worldwide who are living with dementia. By being an advocate, a supporter, and raising awareness, the brain you save may be your own. GoPurple and #ENDALZ—not just for June, but for a lifetime.