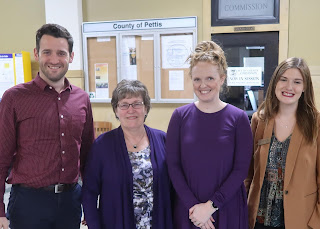 To meditate you are supposed to empty your mind and concentrate on breathing. My internal conversation goes something like this: Breathe in…what should I fix for supper? I need to pick up a loaf of bread…breathe out…did I lock my car? I really need to print those forms. I’ve never had any luck emptying my mind. It just doesn’t work for me because my brain never shuts down its internal conversation.

My first introduction to advocacy was at the Alzheimer’s forum in 2001. Those first few years, we had to educate our legislators about the devastation of Alzheimer’s and related dementia. Eventually, everyone knew about Alzheimer’s, either from us or from personal experience. Over the years, we advocates have become better trained and well organized under the guidance of the Alzheimer’s Impact Movement (AIM).

This year I’ll be making my twentieth trip to DC to visit with my senators and my representative, Congresswoman Vicky Hartzler. In preparation for the DC trip, Jessica Snell, Jerry Dowell, and I met with her field representative Rachel Gilroy and District Director Austin Kramer.

1)      An Additional $354 Million for Alzheimer’s Research. We are still playing catch up with Alzheimer’s research funding at NIH after being woefully underfunded for more than a decade. Our only hope of staving off a devastating blow to Medicare and Medicaid is to find effective treatment or a cure. On a personal level, I don’t want anyone to go through the heartbreak of dementia.
2)      An Additional $20 Million for the BOLD Infrastructure Act. The BOLD Act uses the traditional tools and techniques of public health to fight Alzheimer’s on a local level. Alzheimer’s Centers of Excellence will be established across the country. Local health departments can implement interventions to help with early diagnosis, promoting healthy lifestyles to reduce risk, and data collection. The Act also strengthens the role of the CDC as they lead public health efforts and provide funding on the state level.
3)      Younger-Onset Alzheimer’s Disease Act (S.901/H.R.1903). Persons with younger-onset dementia do not have access to the same support and services as Americans aged 60 and older. Jim was only 49, so we were turned down when we asked for help through the Division of Aging. The Older Americans Act (OAA) reauthorization includes giving access to these services to persons with dementia regardless of age, extends the RAISE Family Caregivers Act from three to four years, and includes elements of the Supporting America’s Families and Caregivers Act. These successes are largely because of the thousands of dedicated Alzheimer’s Advocates who don purple sashes and visit Capitol Hill annually. As Congresswoman Hartzler’s ambassador, I was pleased that she was one of the co-sponsors.
4)      Improving HOPE for Alzheimer’s Act (S.880/H.R.1873). In 2017, the Centers for Medicare and Medicaid Services allowed clinicians to be reimbursed for providing care planning for cognitively impaired individuals. As most of us who have had a loved one with dementia know, care planning is a vital part of improving quality of life. However, few people knew about care planning for dementia and the service was not widely used. The Improving HOPE Act would require Health and Human Services to educate clinicians on the service and report the barriers keeping individuals from using care planning. Our role as advocates will be to seek co-sponsors.

Do you want to be a voice for Alzheimer’s? You don’t have to go to Capitol Hill to have your voice heard. One of the ways you can lend support is to join the Alzheimer’s Impact Movement at Alzimpact.org ($20). You will receive updates and the online tools will make advocacy easy.

During the AIM Forum, we use an app to keep you updated on the message we are taking to our legislators. You can pick up your phone, text, use Facebook or Twitter to add your voice to ours. If enough people whisper the same message, it is much more effective than when one person shouts.