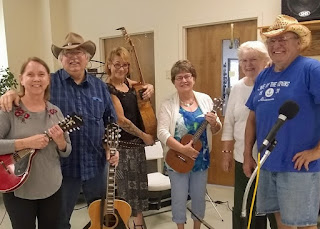 In addition to the metaphorical right hand, those of us who are right-handed have a physical right hand that we count on for many tasks: typing, writing, removing medicine bottle lids, etc. The uses for our right hand are endless.

The Alzheimer’s type of disease Jim had (corticobasal ganglionic degeneration) caused a symptom known as alien limb. In Jim’s case, the limb involved the right arm. He eventually quit using his right hand and it was clutched into a fist. Although we used every technique we could, his hand became infected and his little finger had to be amputated. Jim had lost his ability to play the guitar, but still it comforted me that the hand he used to fret the guitar was still usable.

Problems with hands was brought to the forefront of my attention when I began to have difficulties with my right hand. Each morning, I’d have to work out the kinks before my hand was useful. I kept thinking that the problems would go away, so I limited activities that left my hand curled up and in pain. I took ibuprofen and toughed it out for a few months. Then, my ring finger curled down, and when I tried to straighten it, it snapped into place.

My family doctor sent me to an orthopedic specialist. After x-rays, I found out that more was wrong than right about my hand. He reeled off the problems: trigger finger, bone spurs, arthritis, ganglion cysts, and carpal tunnel disease.

“I’ll give you a cortisone shot,” he said. “It about 48 percent of the time.” Okay, I was game. He sprayed the palm of my hand and injected the cortisone.

“Ouch!” I was not prepared for the pain. “That hurt a lot worse than the shots in my knees,” If my hand could have talked, it would have been screaming.

“You have more nerves in your hand,” he explained. No, joke. Not being a medical professional, I had not considered that.

He put a carpal tunnel brace on my wrist. “You need to wear this when you sleep and when you drive long distances.” After discussion of what constituted long distances, I told him I traveled that far five times a month. Our family band practiced two times a month and we played at nursing homes another three days a month.

“I bet they really enjoy that,” he said. “What instrument do you play?”

“Ukulele,” I said. I told him that reluctantly I had started singing. He wanted to know what I sang. I explained we sang a variety of genres and that one of my favorites was “Cowboy’s Sweetheart.”

“Do you yodel?” he asked. I shouldn’t have been surprised that a cowboy poet would recognize Patsy Montana’s old time hit. I explained that I only yodeled at the end of the song.

I gave a brief yodel, and it brought a big smile to his face. Guess I can mark yodeling in a doctor’s office off my bucket list.

As for the hand, for the first three days I thought I’d made a bad, bad mistake. Then, like magic, it’s a whole lot better. Makes me feel like yodeling just for the heck of it.

Oh wow... the things I learn, and the things I know and recognize! I've had trigger digit release surgery on 8 of 10 fingers and carpal tunnel surgery on both wrists! LOL And I don't play a musical instrument! I did not know about the type of dementia Jim was diagnosed with. It's very similar to that of someone who has suffered a stroke that paralyzes the extremeties. So sorry for his loss of the use of that hand. Blessings to you both! (Keep yodeling--another thing I can't do! LOL)

Thank you for sharing a very informative article recently we have joined our grand parent in kshemalayam old age homes located at kukatpally they provide best services for the elder ones with best activities for more details look at http://www.kshemalayam.com/