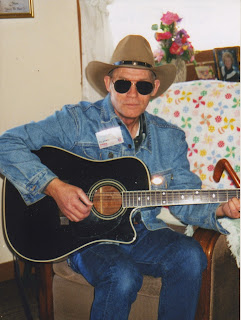 At church, I sat behind the man who had been our family doctor until he retired in 2012. As we greeted each other, he said, “I didn’t recognize you at first.” That should have been my clue to tell him my name, but I didn’t get a chance before we started singing. After all, we had one family doctor and he had hundreds of patients, so that didn’t surprise me too much.

It was communion Sunday, and our associate pastor quoted the passage where Jesus said, “Do this in remembrance of me.”

As we returned to our seats after communion, doc turned around and said, “Are you still Mrs. Fisher?”

“I remember Jimmy,” he said. “Your name is Linda, right?” I nodded. “It’s a shame that you both had to go through that.”

We finished services with a benediction and our final song. As we were walking out, he said, “You know, Jimmy won’t look the same when we get to heaven, but we will know him.”

I could feel tears welling in my eyes, and I said, “I know he will be whole again.”

When I dream of Jim, he doesn’t have dementia. When I think of Jim, I want to remember him as he was before dementia, and sometimes I do. Sometimes, I think of how life changed so drastically when he began forgetting how to remember. He had a phenomenal ability to recall memories, or to reminisce, as his brother Bob called it.

This morning, I was going to town and had some anxious thoughts about what the day was going to bring. Then, a song came on the radio that immediately took me back to a different time. The song I was hearing, “Cinderella,” made me think of Jim, strumming his guitar, and singing the song to me. He would sing, “Lindarella.” The remembrance made me both sad and happy.

Throughout life, we find moments we’d just as soon forget, but those little snippets of memory can enrich our lives if we let them. It is our past that makes us who we are today. Who we are and what we do today will be tomorrow’s memories, so we want to make them worthwhile.