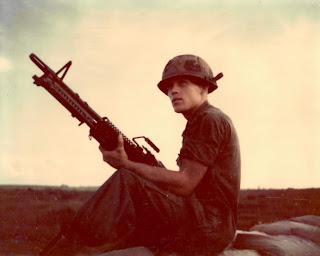 Although I’m a declutter class dropout, I’ve been tackling the piles of storage tubs in my basement. A person my age has a long time to accumulate a wide variety of items. I’ve filled a half dumpster of old paperwork, things I just don’t want anymore, worn outdated clothing, and worthless souvenirs.

The process is slow, but I don’t want to resort to the strategy a friend of mine used when she sorted through her deceased husband’s storage boxes. She spent weeks going through his things, but finally decided to dump the rest without looking inside the boxes. I don’t fault her for this at all. The hardest part of decluttering is knowing what to throw away, knowing what to keep, and how to dispose of the rest.

In the midst of wondering why I hadn’t thrown mountains of stuff away years ago, I’ve found unexpected treasures. I found a lost photo of Jim holding his M-16 in Vietnam. I found a box of ribbons for our Alzheimer’s Walk Committee’s participation in parades. I found a box of magazine and newspaper articles I’d saved but hadn’t put in the scrapbooks from the five years that I coordinated the “Memory Walk.” 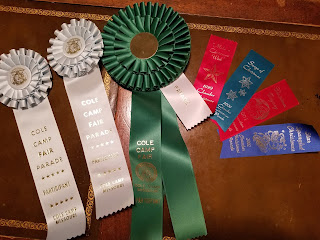 Recently, we found a scrapbook my husband’s mom had made with photos of family members with neatly handwritten captions. I considered it a real treasure. His cousins dropped by for a visit, and I showed the scrapbook to them. My husband, an only child without children of his own said, “Nobody is going to want this when I’m gone.”

Therein lies the dilemma. Our generation’s treasure is trash for the generation following us. Although my kids value some mementos, they have no room in their homes for all my stuff, especially things that mean nothing to them. Along with the items in the basement, I have several collections. Some have at least garage-sale value and others, well, not so much.

I floated the idea that my kids should hold my memorial services at Christmastime and give everyone attending a nutcracker. “Give the big ones to people that I don’t like,” I said.

The best thing to come out of my treasure hunt was finding one of Jim’s guitars that had been in a “hidey-hole” for the past eighteen years. I gave it to my brother to use for as long as he wants. We practiced the songs for our monthly nursing home gig and for my mom’s birthday party. It really warmed my heart to see someone playing Jim’s guitar. When my brother sang “Sing Me Back Home,” I told him that the guitar could probably play that tune by itself. “Maybe that’s why it sounded so good this time,” he said.
Going through the clutter, has been a time of remembrance of good times and hard times. Of course, now I must press on to get past that stage of mass chaos. One of my motivations is the thought that someday someone may just dump the storage tubs into a dumpster without looking at the contents.