Between the Lines; Outside the Box 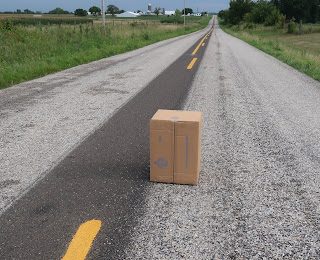 A few weeks ago, I was driving home after a visit with my mother and as I topped a hill, I saw an oncoming car in my lane. The state highway I was on had a shoulder that was every bit of one foot wide. I braked and used all one foot of the shoulder, the kamikaze driver slammed on his brakes and slid back into his own lane with inches to spare.

I was scared, but I think I was mostly angry. Those double yellow lines are on the highway for a reason: it is not safe to pass. Part of the problem, especially on a road leading to the lake, is that people are in an all fired hurry to get to the lake so they can relax. They don’t seem to care how many lives they endanger.

If those aggressive way-over-the-speed-limit drivers would use some commonsense, a lot of car crashes would be avoided. Why is it so hard for some people to stay between the lines?

Anyway, my point is that sometimes you have to stay between the lines. We learned this in kindergarten when they gave us pictures to color. Of course, coloring outside the lines didn’t have life and death repercussions. Most likely, you would have still gotten a golden star even if your paper had only colorful scribbles on it.

Throughout school, we had to think inside the box. In order to pass our tests, we had to give the exact answer outlined in the textbook. I can remember being so frustrated when multiple choice questions were worded in such a way that the correct answer wasn’t the one you were expected to give. One time in college, the professor handed me back my test. “The answer you gave was correct, but it wasn’t the one on the study sheet. I was just being a butt by counting it wrong.”

When we get a paying job, we are expected to think outside the box. Maybe we don’t do a task a certain prescribed way just because “that’s how we’ve always done it.” On the other hand, you don’t want to rush into a bunch of changes to find out that your new way skips some vital steps.

For a caregiver to be successful, we need to know when to stay between the lines and when to think outside the box. For example, I learned some of the best techniques of caregiving through the Alzheimer’s Association. I took advantage of all the seminars and training programs I could find. I didn’t have to use trial and error for everyday problems. Others had paved the way, and I had endless resources at my fingertips.

There were times, though, when I had to think outside the box. Actually, many, many times, especially, when trying to communicate with Jim. He seldom spoke and had trouble understanding what I said. I learned that body language and tone of voice were the best ways to help Jim understand. My mantra for communications was “patience and flexibility.”

The biggest challenge when dealing with dementia is that each person is different. A complete gamut of behaviors—aggression, anger, outbursts, sun downing, sleep issues, confusion, depression, wandering—are possible with dementia. Not every person experiences all of these, but they are common. Dealing with behavior involves thinking outside the box. My best advice is to stay calm, focus on your loved ones feelings, and redirect when behavior is disturbing. If one solution doesn’t help, be flexible and try something different.

Sometimes it is wisest to stay between the lines, but thinking outside the box may be the best way to solve the unexpected twists and turns of dementia behavior.