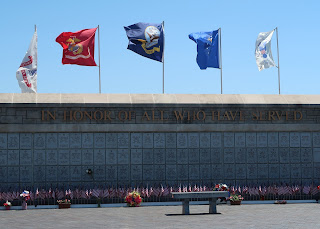 I love biscuits and gravy. As far as I’m concerned, it is the best breakfast ever. A few weeks ago, I pulled down the canister of Bisquick and made biscuits that didn’t raise. “The Bisquick is too old,” I told my husband. Nevertheless, we poured sausage gravy on top and ate them anyway.

After I bought a new box of Bisquick, I made a batch of tasty biscuits that didn’t require gravy to make them edible. Strangely, the next batch was hard and heavy. I grumbled and threatened to buy canned biscuits. Just as we finished eating, Harold said, “You have that new box of Bisquick,” and he pointed at the small box nestled between the cereal canisters.

I made good biscuits again Monday. Normally, on Memorial Day, I’d be rushing to make it to the ceremony at the Veterans Cemetery in Higginsville, but between the oppressive heat and road construction, my sister-in-law Ginger and I went Sunday to place flowers in front of Jim’s resting place. An unexpected advantage of being at home was that my son dropped by for a visit and joined us for biscuits and gravy. I was glad I’d used the right stuff!

When Jim joined the U.S. Army, he showed that he had the right stuff. He fulfilled his obligation as a citizen by serving a tour of duty in Vietnam. Although he didn’t agree with the war, he loved his country. The war changed his life. Between PTSD, a neck injury, and exposure to Agent Orange, he lived with chronic physical and mental pain until his death from dementia.

On Memorial Day, we think of the people who sacrificed for our freedom. We think about the soldiers who died and those who died inside. We honor those who had the right stuff to risk life and life altering injury to fight for the United States of America. We place our hands on our hearts and pledge allegiance to the flag.

The original pledge of 1892 was recited as “I pledge allegiance to my Flag and to the Republic for which it stands: One Nation indivisible with Liberty and Justice for all.” With these twenty-three words, Americans pledged that we would not be divided and that we wanted liberty and justice for everyone.

Later, of course, “my flag” was changed to “the flag of the United States of America.” The U.S. was a land of immigrants, and this change was to clarify the pledge was to the U.S. flag. The last change in 1954 was to add “under God.”

A lot has been said lately about respecting the flag, but we disrespect it in many ways without a second thought, or being aware that we’ve done so. The flag is not to be used for advertising, printed or otherwise impressed on paper napkins or boxes that are for temporary use and discarded. No part of the flag is to be used in a costume or athletic uniform.

It is important to think about the right stuff that goes into being an American. The right stuff begins on the inside and manifests itself in how we treat others. Anything less and we disrespect the flag and those who risked everything to protect our freedoms.

On Memorial Day, we think about the sacrifices that make this the country it is, but it’s our everyday behavior that makes that sacrifice worthwhile.