Play Music on the Porch Day 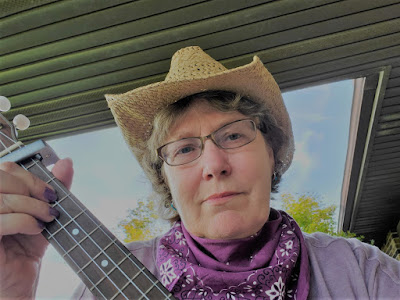 The last Saturday in August is “Play Music on the Porch Day.” I’ve signed up for this songfest for the first time. Usually, after the day is over, I’ll see a post from one of my musician/singer friends and realize that I missed it again.

Playing music on the porch is definitely a throwback to childhood for me. My mom came from a large musical family, and they spent numerous Saturday nights playing music on Grandma and Grandpa Whittle’s porch. It seemed that everyone had an instrument and talent to spare. Grandpa would dance a jig, and we kids would try to keep up with him.

Jim came from a similar background. He grew up in a musical family with impromptu jam sessions galore. After we were married, it wasn’t unusual for Jim to invite his musical friends and family to our house for jam sessions. Jim and I sang together occasionally, but I preferred to listen to the more talented singers. I often told Jim that if I had his talent, I’d have been rich and famous. Jim knew the road for a musical career was often at the expense of the family left at home. “I won’t do that to my family,” he said.

Because of dementia, Jim lost his ability to play his guitar and sing. Luckily, the videotapes in our video library will allow our grandkids, and someday our great-grandkids, the ability to listen to countless “playing music on the porch” days.

But hey, singing on the porch is good for the soul and a great way to connect with other musicians. For the past several days, I’ve been watching the videos posted to the “Play Music on the Porch Day” group. It has been so much fun to see how others approach practicing for the big day.

Saturday was a lovely evening to sit on the porch and play music. I propped my phone on the music stand and shot videos of three songs. The first song I sang and recorded was “Cowboy’s Sweetheart.” For that song, I put on my hat. Due to a bad case of “hat hair,” I wore the hat for the other two songs I recorded, “I Love You Honey” and “It’s My Lazy Day.” I was enjoying myself so much that I played until my fingers hurt and the sun was getting low in the sky.

Since the pandemic hit, I’ve become more accustomed to enjoying the simple moments of life. Sunday afternoon jam sessions with the Capps Family Band are the highlight of my week. We haven’t been able to play music for the residents at the nursing homes for seven months, but we keep working on new material.

I've discovered that when my fingers are sore from playing music, my heart is happy.