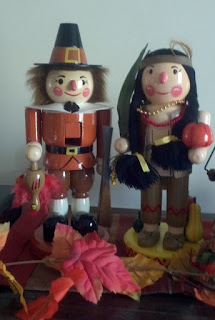 Unfortunately, one of the important celebrations for our country has been mainly forgotten. It seems that the only important thing about Thanksgiving weekend is Black Friday. Wouldn’t you know that my Google calendar has Black Friday on its list of holidays with the exact same emphasis as Thanksgiving?

It seems that not only has Thanksgiving been demoted, our seasons have as well. We thought when we went from winter to summer without any sign of spring, that was a once-in-a-lifetime fluke. Now, we’ve gone from summer to winter without more than a whisper of autumn. We were sweating one week and dashing through the snow the next.

It’s sad during this time of thanksgiving that thankless people abandon loves ones because “he won’t remember me,” or “I don’t know what to say to her,” or “grandpa keeps asking the same questions.” Oh yes, it might be a little awkward at times, but that doesn’t mean it isn’t worth the effort. These people were the first to be critical of families who remained a constant presence in their loved one’s life.

It irritated me when someone asked why I provided personal care that the nursing home was “paid” to do. I wanted Jim to have excellent care and as much time as I spent with him, there is no way that aides could spend that much time with one resident.

When I visited Jim in the nursing home, other residents thought I was there to see them. I took time to talk to them, accept their hugs when offered, and to compliment them on a pretty blouse, or a new hairstyle. I entered into their world and felt the anger they couldn’t for the way their families had forgotten them.

At Christmas, an influx of visitors showed up with inappropriate gifts and criticisms of their loved ones care, surroundings, or the other residents they found to be annoying. These visitors never came alone. They missed the one-on-one time so important to the residents and replaced it with confusion.

When we think about the forgotten holiday, it is a time to remember the forgotten, forgetting people. Be thankful that you can spend time with your loved one, you can hug them, and touch their warm, living hand. The sad thing about Alzheimer’s and other dementias is that the time will come when they are gone, and you will rue the time you threw away. Time that could have been spent relishing that moment of clarity, the recognition that comes and goes, and the opportunity to go for a drive or a walk in the park.

I miss the times when Jim showed a glint of humor or understanding, the communication without words. I miss holding his hand, giving him a shower, coaxing a smile, and stopping by Dairy Queen to get him a milkshake. I miss the friends I made with resident’s family members and the staff. I miss the quirks of the residents.

Thanksgiving isn’t so much a holiday as a way of life. When we are thankful for the blessings we have, we don’t let setbacks get us down—at least not for long. A little bit of thankfulness goes a long way toward coping with the unfortunate circumstances that life generously sends our way.