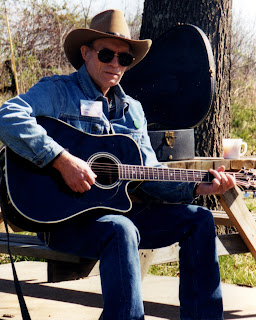 After Jim developed dementia, he forgot the lyrics to most songs and had difficulty playing his guitar. Eventually, he sang the same cowboy song repeatedly. This song is so obscure I can’t find the lyrics online, but I think the title is “I’m Telling You, Friend, I Ain’t Had a Good Day.”

Maybe the reason this song stuck in Jim’s brain was because of all the bad days he had. The song is a warning even to friends about what a person feels like doing on a bad day.

I felt this song a lot when I was a caregiver, and I’ve been feeling it lately. I don’t want to take my anger and frustration out on anyone, but especially not on my friends and family. Instead, I just internalize and feel sad and depressed.

Too many bad days are beyond our control. When you receive a one-two punch in the face, the third one can be the knockout blow.

So, I binge on Hallmark feel-good, predictable movies. I play games on my Kindle where I win some and lose some, just like real life.

Playing my ukulele makes me happy. My granddaughter says it is a happy instrument, and I agree with that assessment. I regret that I never learned to play an instrument while Jim was living. I could have learned so much from him. Maybe he could have taught me that song about a bad day. Playing it on a happy instrument would have surely pointed out the absurdity of how we let things we can’t control ruin a perfectly good day.

I sometimes have to remind myself of two yardsticks I used to get myself through the days of caregiving. One measure was “so what.” When Jim did something he shouldn’t have done, I would ask myself “so what?” The day he stripped his clothes off in the front yard, my mother-in-law called me at work. She couldn’t get him to come in or put his clothes back on. So what? We lived in the country, there wasn’t much traffic, and the weather was mild. It took me fifteen minutes to drive home and solve the problem.

The other measure is “What difference will it make a hundred years from now?” So far, I can’t think of anything.

Someone pointed out that without bad days we wouldn’t appreciate the good ones. I am thankful that I have a core trait of optimism. I know that I’ll come out on the other side with inward peace and outward calm. In my lifetime, a few bad days are, ultimately, followed by a hundred good ones.