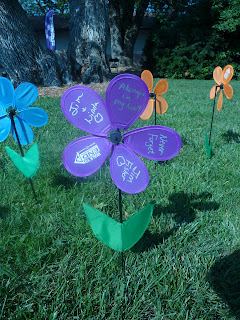 We had a bright sunshiny, warm day for our 2013 Walk to End Alzheimer’s at the Missouri State Fairgrounds Saturday morning. I was there bright and early—6:30 a.m—along with other volunteers and members of the committee. Sheila and I played traffic cops as we directed placement of tables, conferring as to whether that table might work better here or there.

For once we didn’t have to worry about rain, but heat was a concern with temps expected to soar into the upper 90’s. At the last minute, while a volunteer was on his way to get more ice, we asked him to buy more water too. Walkers began to arrive and organized chaos took over as teams began to group together.

My sister-in-law, Ginger, started the cake walk, Kim and Bobby Brown manned the raffle table (which may have helped them rest up for awhile after bringing a trailer load of tables and chairs), Sheila grabbed the microphone and began to make announcements, registration tables were manned, and on my table, I arranged books to sign and give to walkers.

As I signed, I chatted with friends and family who came up to get a copy of Focus on the Positive. I also met new friends who came to the walk for the first time this year. As I was signing, a woman walked up wearing a shirt that said “Hellen’s Heroes.” I knew she was on the team honoring Hellen Cook, the woman with dementia whose body was found after nearly a month long search. Hellen was Darolyn’s mother, and she introduced me to her brother Mike. My heart went out to this family who lived through a caregiver’s worse nightmare. They have taken this tragedy and turned it into a positive by proposing “Hellen’s Law” to tighten up reporting an endangered missing person. I had my picture taken with member’s of Hellen’s Heroes and felt an instant connection with Darolyn.

Later as I was signing books, Linda Newkirk, executive director of the Greater Missouri Chapter, was explaining the significance of the pinwheel flowers and Jim’s Team held our purple flowers high to show that we had lost a loved one. Others held up orange, blue, and yellow flowers as their colors were explained. Shortly after, Sheila came to my table and told me I needed to go up to the front where Linda was speaking.

She finally dragged me away. When I got there, Linda was talking about Hellen Cook’s family and their advocacy. Then,Linda Newkirk, Executive Director of the Greater Missouri Chapter, announced that the chapter is placing a brick in their Garden of Hope in recognition of my volunteer work and advocacy. I am so honored! Even after all these years, I still feel the Chapter did more for me than I can ever do for them. They were my lifeline for ten years while Jim and I traveled the Alzheimer’s journey.

Sheila, my granddaughter, and I dropped our pinwheels into a bucket and took the lead as four hundred walkers began the walk. Instead of finishing the walk, we stopped and cheered others on as they came down the shaded walkway. We headed back to the Highway Gardens. Volunteers were planting the pinwheel flowers in the Promise Garden. The breeze turned the pinwheels and tears pricked my eyes to see the expressions of love.

I walked through the Promise Garden snapping photos and found the flower I had decorated for Jim. The breeze continued to turn the pinwheels nearby, but it was as if Jim’s flower stopped to pose for the photo. I snapped the photo, and the pinwheel resumed spinning.