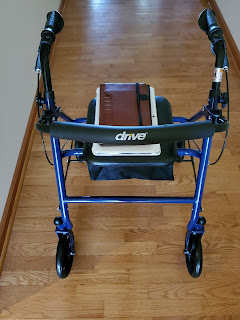 When my kids were small, we put them in baby walkers so that they got a feel for mobility. I don’t think that it made them walk any sooner, but once they learned how to get their legs moving, they experienced their first taste of freedom. It was interesting to observe how they loved moving even if it was backwards.

I’m sure I didn’t have a baby walker when I was a kid. I probably learned to walk by walking between two people whose job it was to catch me when I got off balance. In due time, I became a walker without a walker.

After Jim started having memory problems, he and I walked in the Sedalia Memory Walk. We were Memory Walkers. The walk has been rebranded to the Walk to End Alzheimer’s, but the mission is the same. Last year, the walk was “everywhere” and we retraced the original 1998 walk route that Jim and I took. Our family group started at Liberty Park, walked to downtown Sedalia, and back to the park. The walk was more of a physical challenge than it was when I was twenty-two years younger.

When Jim was in the Alzheimer’s unit, he liked to pace. He paced day and night until he dropped from exhaustion. After he started losing his balance and fell several times, they put him in a merry walker, which is much like a baby walker for adults. Occasionally he would wind up in weird positions when he was stuck in a corner or against a wall. He was strong and occasionally turned the walker over splitting a lip or putting a knot on his head. Even with the mishaps, it was so much better than being stuck in his recliner all day.

Recently, Harold and I were having lunch at Liberty Park and it made me think of how a group of us from work walked in the park after work. It was a good way to get some exercise, reduce stress, and relax after a hard day.

Lately, walking has not been relaxing for me. Instead, I put off walking as much as possible. When each step hurts, it seems prudent to limit those steps. I also have trouble navigating when I stand up from a lying or sitting position. When I visited my ortho doctor to get shots in my knees, he suggested that I get a walker to use when I get up at night.

The walker came in a package from Amazon and made me think of how life goes in circles. Kids use walkers and we “older” people use walkers. Was I really old enough to need a walker?

At first, I didn’t think I’d use it much, but I found that it helps me in a couple of ways. First, it saves me steps because I can load the seat with items I need to carry. I can also save myself from the strain of extra weight by using the seat. My doctor tells me that my knees don’t know if I’m carrying weight in my arms or whether I’ve just gained an extra twenty pounds.

Along with losing a few pounds, I’m slowly starting to feel better and have less pain. I walk more now even when I’m not using the walker.

I remember clearly a remark a woman made at an insurance benefits seminar I attended nearly three decades ago. She had arthritis and stood up with the help of a cane to speak. “I walk,” she said, “so that I can keep walking.”

I don’t remember her name, but I certainly remember her words of wisdom. I will always be grateful that she shared her insight to inspire me to be a walker as long as possible.