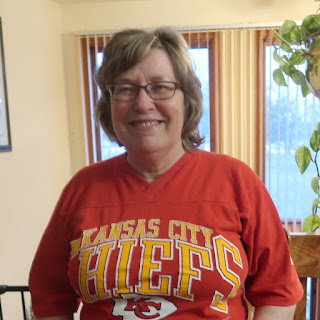 On Super Bowl Sunday, we Missourians are super happy to have the Chiefs in the big for the second time after their long dry spell. Jim was a dedicated fan and proudly wore his Chiefs gear through the years of heartbreaking losses. He always looked forward to the next year when he was sure they would go to the Super Bowl.

For years, the Chiefs playing in the Super Bowl was on my “bucket” list. I was beginning to wonder if I would live long enough to see the big day. I would say, foolishly of course, “I don’t even care if they win. I just want them to make it!” Well, I reneged on that statement immediately after they won the Lamar Hunt Trophy.

I truly regretted that Jim didn’t get to see his beloved Chiefs go back to the Super Bowl. When Jim was a teenager, he boxed at a Boy’s Club in Kansas City where he met Lenny Dawson.

When Jim was in the early stages of dementia, he decided he wanted a Chief’s coat. One weekend, we looked everywhere in town, but he didn’t find the one he wanted. I went to work on Monday and when I got home, Jim proudly showed me the Kansas City Chiefs coat he had bought.

“Where did you get the coat?” I asked.

“Kansas City,” he replied. “They didn’t want to let me in. Said I needed a card.”

“Yeah. I told them I wanted a Chief’s coat.” He went on in his broken vocabulary to tell me that he had told them he was a Vietnam veteran and had fought for freedom. Freedom, which to him, meant they shouldn’t keep him out of a store he wanted to go into.

After more prodding, Jim finally related that someone made the decision to let him in the store, and he paid for the coat with his debit card.

“How much did it cost?” I asked

“Well, it is a nice looking coat. I guess I’ll find out how much it was when I get the bank statement.”

Some years the Chiefs were so bad that fans were wearing bags over their heads at the games. Jim, on the other hand, sported his collection of Chief’s shirts at the nursing home, unaware of who was winning the game on his TV. He could see the Chiefs playing and that was good enough for him.

As the Chief’s go the Super Bowl today, it is on the heels of the news that former Chief’s head coach Marty Schottenheimer was moved to a hospice care facility. Schottenheimer, now seventy-seven years old, was diagnosed with Alzheimer’s in 2014. I hope he gets to watch the Super Bowl today. Although he coached several different teams throughout twenty-one seasons, I’m sure he will be rooting for the team wearing the red shirts.

Super Bowl Sunday—and the Chief’s are playing. Doesn’t get much better than that.

I am a doctoral student working on a program/study to support caregivers. We would like to share our free resource, the Customized Toolkit of Information and Practical Solutions (C-TIPS), with caregivers. You can view our program at go.gwu.edu/ctips and can contact me at ctips@gwu.edu. Thank you!

Ms.Fisher, I love your Blog! So interesting, so real, so well written. I am writing (or more compiling) a book about Alzheimer's and I would love it if I could include a quote from you in the book. If you are interested in that I could email you the official "ask" letter with all of the details. My email address is: sricardi@northbridgecos.com - Be Well! Sharon Ricardi