Waltz of the Angels 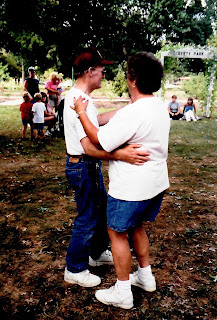 Saturday was a busy day for me, although probably no worse than any other Alzheimer’s walk day. Because of the pandemic, walk was everywhere, and  Jim’s Team walked the same route as we did the first time Jim and I walked. As far as I know, that was the only time the Alzheimer’s walk started at Liberty Park.

My day started with a quick trip to visit the Promise Garden at Centennial Park. Then, I drove nearly an hour to join the Capps Family Band to play music at a Swap Meet where we raised money for Alzheimer’s. Well, we were pretty excited to play in front of an audience again. Originally, I said we couldn’t play music the  same day as the Walk to End  Alzheimer’s. After a few phone calls, I decided to change the time of our walk to early evening so that I could do my favorite thing—double book myself.

After we played music for a while, my sister-in-law Kathy stepped up to the mike to sing “Waltz of the Angels.”

“I had a dream about that song last night,” I said, to no one in particular.

As Kathy sang, the dream came rushing back to me. In my dream, Jim was dancing with his cousin, Joyce. The dream was based on a memory and thoughts of Joyce. I had just learned that she had cancer and was not doing well.

My mind wandered back to the 1999 Fisher Family Reunion. Jim was at loose ends. Some of the family was playing music, but Jim had trouble playing along with them and became frustrated. Joyce walked up to him and said, “Come on, Jim, let’s dance.” She took his arm and led him out into the grass and they started dancing.

I don’t remember what song they danced to at the reunion, but in my dream, they were dancing to “Waltz of the Angels.”

After we finished playing music at the Swap Meet, Mom and I went through McDonald’s drive-thru. While we were waiting to order, I turned my phone on. The first thing I saw was a message from Jim’s sister with the news that Joyce had passed away.

Joyce had a personality that was larger than life. She was a prankster and enjoyed embarrassing young people, but it was always with good humor. The stories people are sharing about her are a good reflection of the person she was when she was having fun.

Although she often made me laugh, the side of Joyce that I knew best was the woman who cheered her cousin up by asking him to dance. I think of her eyes welling up with tears as she hurt when others hurt. I think of her caring heart and her faith in God.

I remember one time when we were all much younger, Joyce made Jim  promise that he and his brother would sing at her funeral. I can’t  remember what song she wanted them to sing. The fallacy of that plan was that Joyce outlived Jim, and he won’t be able to keep that promise here on earth.

In my heart, I hear the music playing as Joyce is reunited with her loved ones in heaven. In my mind’s eye, I see Jim and Joyce dancing the waltz of the angels.