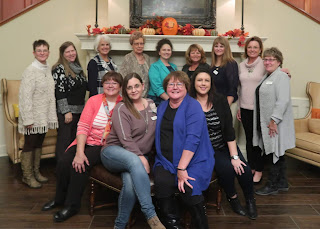 Our Sedalia Business Women’s Club just finished celebrating National Business Women’s week. We had an activity planned for every day except Friday. We kicked off the week with our annual fundraising chicken dinner. Monday, we had lunch with Rotary. Tuesday, we had our past president’s dinner. Wednesday, we had friendship lunch. Thursday, was our membership activity with, you guessed it, heavy snacks. Saturday was a social activity with shopping and food. Sunday, was church with the president, followed with lunch at a local restaurant. I’m pleased to announce that somehow I only gained one pound.

Our club begins each monthly dinner meeting with the Club Collect. Often, when you recite a poem, or in this case, a prayer, you don’t always ponder the meaning behind the words.

From beginning to end, the Collect for Club Women is chock-full of wisdom. The part that has been on my mind lately is the sentence: “Grant that we may realize it is the little things that create differences, that in the big things of life we are at one.”

Have you ever had a terrible argument with a friend or family member, and a week later, you are still upset with them but can’t remember what started it? That’s because you have let some small insignificant disagreement cause a big uproar.

One time when I had to have surgery, Jim was much more worried about it than I was. Since I had to stay in the hospital a few days, I wanted a new robe and house shoes to match. Finally, in frustration he shouted at me, “You seem to be more worried about matching your outfit than you are about the surgery!” Actually, I was covering up my nervousness by concentrating more on the little things, that apparently we disagreed on, than the big thing like being knocked out while the surgeon ripped out body parts.

Later when I became Jim’s caregiver, I was able to deal with big problems better than day-to-day issues. I could handle a major medical problem, but if he didn’t eat his dinner, I could have a meltdown.

Little things can create differences that spill over into the big things, especially when dealing with a grudge holder. I confess that I was once a grudge holder, but somewhere along life’s pathway, I discovered that grudges were a total waste of time.

Yet, I’ve seen life-long friendships and marriages break up over the little things. Some people can be so persnickety, that they tend to get on your nerves. Sometimes, it’s just better to capitulate. Let’s face it when someone wants things done a certain way, then if you don’t do it to suit them enough times, they will either live with the way you do it, or do it themselves. I call that a win-win.

Other times people (for a lack of better words) seek revenge. I know a man who complained every day about the lunch his wife fixed him. One day, she had her fill of his complaints, so she put a picture of a sandwich between two pieces of bread and put it in his lunchbox. I don’t  know if he ever asked her to pack his lunch again.

The best plan is not let the little battles blow up into WW3. After all, differences are what makes a relationship interesting. If we all thought alike, the world would be unbearably boring.