Life has been so hectic the past few weeks that I haven’t had time for a fleeting thought, much less rumination. If I could only find a way to add more hours to the day, it would be helpful.
I guess in a way, I have added more hours. Unfortunately, the hours are stolen from sleep time. I’ve been in the bad habit of going to bed at midnight and due to appointments, conferences, Walk to End Alzheimer’s, etc, etc, I’ve been getting up early, earlier, or earliest. 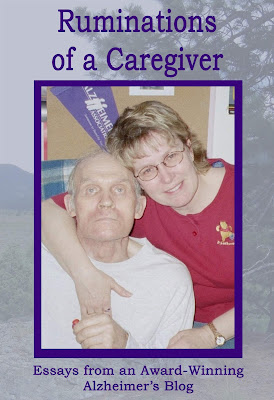 Lately, if I can’t find two things to do at once, I feel like I’m wasting precious time. I watch TV and play games on my Kindle at the same time. I walk the dog and practice songs for our nursing home gigs. I stop on my way to the basement to play a short song on my ukulele. You get the idea, I’m sure.

Of course, this doubling up can cause chaos at times. I spilled milk two days in a row. Once on my PC and the other time all over the counter and (oops) my husband. Occasionally, I put something in the cabinet that should have gone in the refrigerator, or leave my phone in the living room and pick up the TV remote instead.

Last week, my husband and I mowed our acres of lawn, and I had some quality rumination time while I mowed. Although, I was exhausted, I decided to use the trimmer, but the battery was dead. (Darn the luck!) I put the battery on the charger, took a shower, and a nap.

The next day, I tackled the weeds around our bevy of hydrants. As I was starting to wear down, I looked at my cell phone to see how long I’d been at it. As I pulled the phone out of my pocket, it began to play a Carter family song from the early 1950s “It’s My Lazy Day.” Seriously? Is that irony, or what? My smart phone is a smart-aleck phone.

While I was frantically trying to get everything done, I was home alone when I started having chest pains. Yes, I’ve had them before, and had three stress tests that showed my heart was in A-1 shape. I took the meds that should have stopped the pain, but it kept right on coming. I was 99% sure it was nothing to worry about, but that bitty 1% warned that my pain was classic heart attack symptoms. All I have to say is never think you might be having a heart attack without taking a book to read. I spent the better part of the day being poked and prodded, just to reaffirm that I had a non-emergency, emergency.

Anyway, the Walk to End Alzheimer’s was a resounding success this year. We had beautiful weather, great attendance, and exceeded our goal. So Saturday was a long day, but a fulfilling day.

Whew. Finally, I felt like I could rest, except Sunday was music practice; Monday, a doctor’s appointment; and Tuesday, advocacy training; Wednesday, we played music at the first of three nursing homes.

Thursday, I had my oil changed, tires rotated, and brakes worked on. It was time well spent because I logged on to the wi-fi and played my game while I waited. Soon, I was speeding down the road, listening to music on Sirius FM. I switched between stations listening for songs I might want to sing. Music is soul food and conducive to rumination.

Thanks for sharing your late to bed, early to rise life--mine is just like that, and now that I know I'm not alone, I won't think I'm losing it every time I have to retrace my steps to do something that I had started but never finished. I think we get brain overload and when that happens, we make mistakes. Blessings to you ... I'll think of you often as I get up in the middle of the night!