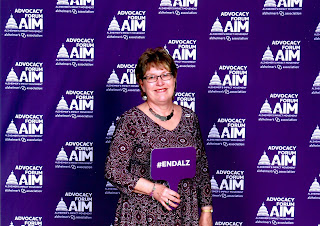 My trip to the Alzheimer’s Forum this year coincided with the Cherry Blossom Festival and the Blossom Kite Festival. It so happened that when my traveling buddy Jennifer and I ventured out, we ran into human traffic jams every step of the way. It was a little claustrophobic at times, especially when we were stuck at the metro exit behind a crowd of slow moving people.

Capitol Hill didn’t seem quite as congested as usual this year and for the most part the security lines moved and a decent pace. It helped that we weren’t rushed between our appointments.

After our forum training and updates on all things Alzheimer’s, we were prepared to speak of Alzheimer’s as the public health crisis it has become. We had four asks for our legislators:

1)      Increase Alzheimer’s research funding at the National Institutes of Health (NIH) by $350 million for fiscal year 2020. Currently, 5.8 million Americans are living with Alzheimer’s disease. Without a medical breakthrough, that number will triple in a generation!
2)      Support $20 million in fiscal year 2020 to implement the BOLD Infrastructure for Alzheimer’s Act at the Centers for Disease Control and Prevention (CDC). BOLD will establish Alzheimer’s and Related Dementias Public Health Centers of Excellence, fund public health departments, and increase data analysis and timely reporting.
3)      Co-sponsor the Improving HOPE for Alzheimer’s Act (S. 880/H.R. 1873). In 2017, only 1% of seniors living with Alzheimer’s received the Medicare care planning benefit. We must educate providers and individuals with dementia about available care planning services.
4)      Co-sponsor the Younger-Onset Alzheimer’s Disease Act (S. 901/HR 1903). This would allow individuals with younger-onset dementia to receive services provided under the Older Americans Act, currently available only to Americans over the age of 60.

Our first visit of the day was with Senator Blunt who has become a champion for Alzheimer’s. He greeted us, began to speak of the tremendous cost of Alzheimer’s, and compared it to the defense budget.

Next, the Missouri delegation attended the Senate Hearing on Alzheimer’s disease. In his remarks, Senator Hawley recognized our fellow advocate Lonni Schicker and briefly told about her younger-onset diagnosis. After the hearing, we visited his office. 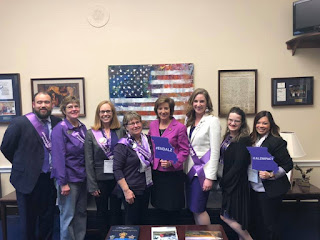 My last meeting of the day was with Congresswoman Vicky Hartzler’s office. I only met with her briefly since she had to go to the floor for a vote. We finished our visit with her senior legislative assistant, Bryan McVae.

After speaking to our legislators, we came away with the feeling that we are in this battle together. This is different from when we used to have to spend all our time convincing them that Alzheimer’s affects all of us in one way or another. Our hopes are flying as high as a Blossom Festival kite that by working together, we can, and will, find a cure. 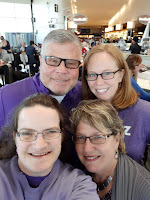 For the past few years, I’ve stayed an extra night to avoid the nail biting rush to the airport. I’d much rather be way early than just a few minutes too late to catch a flight home. At the airport, we came across some fellow advocates for a “selfie.” Then, we disbursed to our separate homes to continue the fight to end Alzheimer’s.

for agitation or violent behavior in alz patients try the nykweightvest , calming relaxing it works wonders

It was really very nice article on Alzheimer's and Dementia. There are lot of myths associated with these disease. Thanks for sharing