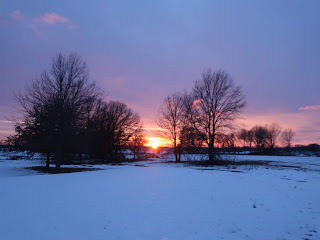 After nine days of bitter, cold weather and gloomy skies, I walked the dog outside and wondered…what is that bright shiny object casting shadows upon the earth? I welcomed the rays of sunshine and the tiny amount of warmth it psychologically added to the day.

I immediately thought of how lately I’d heard the idiom “bright shiny object” to describe people who have risen quickly in the world of politics. In other words, they are saying these young, energetic politicians are charismatic but not long lasting or particularly useful.

Sometimes older workers can have this same attitude toward new employees. When I found a job at the electric cooperative, I was the youngest person in the office. My job was to learn how to operate that new fangled computer. A minority of the employees were suspicious of me because they thought I was hired so they could be replaced with a machine. I was a bright and shiny object in their world, and they would have liked nothing better than to sandblast the shine. Fortunately, most employees thought I was useful and non-threatening, and they polished the shine.

I came to know and love my co-workers as family, and they inspired me to be a polisher rather than a sandblaster. I am happy for my friends and family when they succeed. Life is tough enough without sandblasters purposely trying to take someone down.

To refer to someone as a bright shiny object should never have been a derogatory term. The definition of bright means “full of light.” I believe that Alzheimer’s caregivers are full of light. They’ve had their lives sandblasted by a devastating disease, but accepted the responsibility and challenge of caring for loved ones. Research shows that Alzheimer’s caregivers provide more hours of care and a higher level of assistance with activities of daily living than caregivers for persons without dementia. One in three Alzheimer’s caregivers reported that their own health deteriorated. Yet, each year, more than 16 million family and friend caregivers provide more than 18 billion hours of care for their loved ones with dementia.

Shiny has two definitions that I thought noteworthy—(1) worn or rubbed smooth, (2) reflecting light. Alzheimer’s advocates are often caregivers or former caregivers. Advocates can be worn slick from years of caregiving, but they get the importance of advocacy. Some are a voice for their loved ones with dementia, but others are the voices of persons living with dementia. Becoming an advocate is a positive reaction to a negative situation. The Alzheimer’s Impact Movement (AIM), the advocacy arm of the Alzheimer’s Association, has driven policymakers to address the crisis of Alzheimer’s disease. AIM advocates have diligently worked for years to bring national awareness of Alzheimer’s disease and increased research funding.

An object is a goal. The ultimate goal is to find a cure for Alzheimer’s, so that future generations will eventually forget the wreckage Alzheimer’s leaves in its wake. The Alzheimer’s Association is the largest worldwide non-profit funder of Alzheimer’s research. The NIH (National Institutes of Health) has steadily increased their Alzheimer’s funding. A worldwide effort to end Alzheimer’s disease adds to the hope that a cure will be discovered sooner, rather than later.

These bright shiny objects have staying power and are extremely necessary in the fight against Alzheimer’s. Caregivers overcome adversity to be full of unconditional love and light, advocates reflect the light and take AIM at engaging policymakers to make Alzheimer’s a priority, and researchers seek a clear and obtainable goal to end Alzheimer’s.

The clouds roll in again, and I wonder where is that bright shiny object that brings light and life to the world? The clouds may hide it from view, but it steadfastly shines, patiently waiting to burn through the gloom to brighten the world with hope.