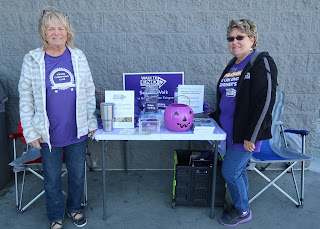 Sunday, my sister-in-law Ginger and I spent a good part of the day at Walmart collecting for the Sedalia Walk to End Alzheimer’s. Our walk was in September, but since we fell short of our goal, we were trying to get a few more donations and “meet and greet” the shoppers.

We’ve set up outside Walmart several different times, but it’s usually during the heat of summer. In fact, we have a real talent for choosing the hottest day of the year. This was a first for me—I wore a sweater.

The weather was sixty-ish, but the wind was gusty at times and just a steady strong breeze at others. I lugged the table to the ideal spot and Ginger and I began our battle with the wind. We struggled with taping down the tablecloth. As soon as I set the collection jar on the table, the wind caught it and blew it down the sidewalk. Finally, we had everything taped or weighted down. We set out T-shirts, books, Dum-Dums for the kids, and informational brochures.

People couldn’t decide how to dress for the weather. We saw shorts, flip-flops, children with bare feet, sweaters, coats, dresses and high heels, boots, and a few who might have made the famous Walmart photo ops.

The time flew by as people stopped to donate and share their stories. Many of them have traveled the same journey as I have.

A young woman told us, “My nana has it.” Others: “My dad” or “My mom.”  Another lady made a donation and said, “Thank God, no one in my family has Alzheimer’s, but we do have friends that have it.”

One man wheeling a full shopping cart almost passed us by, but he stopped. “Thank you for doing this,” he said. “I walked in Tennessee this year.”

One man came up to us. He reminded me of Jim because his hat was covered with colorful hatpins. He chatted for a while, and then he said. “I’ve been diagnosed with Alzheimer’s.”

The T-shirts were popular items and I went back to my car several times to replenish the stock. Just as we were thinking about closing down, a man wearing a suit walked up to us. He made a donation, and we handed him a T-shirt. “My mother died from Alzheimer’s,” he said. He looked up at the sky and I saw the tears welling up in his eyes. He began to talk about her and her faith in a better world. The tears slipped down his face and he dried them with the T-shirt. He talked about his family dynamics and the guilt his brother felt for not being there for his mom. As he wiped tears, he said, “I’m sorry, I didn’t mean to bring you down.”

We hugged in the way that those of us who have lost loved ones to Alzheimer’s hug to comfort each other. Then, he hugged Ginger.

As it usually happens when we fundraise for Alzheimer’s—we find others who know the pain of watching a loved one fade away with this formidable disease. As always, we share the hope that the end of Alzheimer’s is nigh.