Christmas at the Home 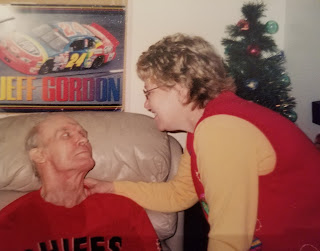 I saw a post this morning, “Please, if you have loved ones in a nursing home try to spend some time with them.” This reminder made me think of the five Christmas holidays Jim spent in a nursing home.

One of the disturbing trends I noticed at the nursing home was the lack of family support, especially in the special care unit. Excuses ranged from “he doesn’t know me” to “I can’t stand to see her that way.”

The family who never visited missed the smiles and bright eyes when a loved one walked through the door. When I visited Jim, some of the other residents felt that I was there to see them too. I greeted them by name, commented on how pretty someone’s dress was, or offered to get the attention of an aide when they pleaded, “Will you help me?”

“They won’t let me help you, but I can get someone who will,” I told them.

Christmas time seemed a particularly lonesome time at the nursing home while families celebrated at home. I was looking through some of my Christmas memories in Indelible (memoir in progress). Here are some of the Christmas memories:

Around Christmas time, we drove around town after dark to see the lights. The state school had an outstanding display with Christmas scenes set up in small buildings. Christmas music played on loudspeakers throughout the drive. Eric, Shawna, and the grandkids enjoyed riding through the light display too.

I brought Jim home for Whitney’s birthday party and our annual Christmas Eve get-together. After our Christmas Eve celebration, we drove Jim through the Christmas lights before returning him to the nursing home.

On Christmas day, I picked him up to have dinner at his mom’s house. We made it through our first Christmas with Jim living in a nursing home by making it as close as possible to our normal celebration.

Home for another Christmas:

I brought Jim home and helped him out of the van and down the walkway. He took his usual seat on the reclining section of the couch.

Rob and Colby were playing video games on the TV. Before long, he yelled, “Hey!” and jumped up and started going toward them.

“I wonder if he wants to play,” I said. At one time, Jim loved video games, and he played Mario Karts long after he developed dementia.

Rob ejected the game they were playing, and inserted Mario Karts into the Play Station. “Here, Dad,” he said as he handed Jim a control. Jim didn’t seem to remember how to use it, so Rob passed the other control to Colby and helped his dad maneuver the one he held.

After a few races, Jim remembered how to run the car around the track, but the master of the game was not competitive.

Christmas at the Home:

While Jim was in the nursing home, the staff and I did everything we could to make the holiday special. They decorated for Christmas and provided Christmas cards that they taped to the doors. I brought a tree and decorated his room.

The staff drew names and gave Christmas presents to the residents. Jim was wearing his gift, a Dale Earnhardt, Jr. shirt.

I had planned to take down his Christmas tree, but the box was still in the car where I had forgotten it. The rain pelted against Jim’s windows, and I dreaded going back outside. As I spooned his food, I talked to him. “Well, I’m not going back out in that crap to get the box for the Christmas tree.” Jim’s eyes moved toward the tree. “I guess you’ll get to enjoy it one more day.”

We spent fifteen minutes together Christmas Day 1969 before Jim returned to Vietnam and I flew home. From then until Jim passed away, we were together every Christmas Day. I cherish the memories of our Christmases regardless of the setting.