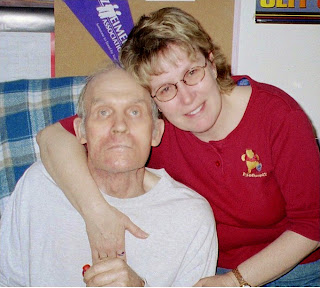 When I was caring for Jim, I showed great confidence. I tracked his medications, I knew his health history, and we communicated on an almost subliminal level. Through classes, seminars, workshops, online training, talking to medical professionals, from the Alzheimer’s website, and support group, I learned everything I possibly could about Alzheimer’s disease.

Knowledge was my weapon against Alzheimer’s. I tracked research and tried to get Jim into promising drug trials. The major roadblock we ran into was that most required participants to be at least 65 years old. When I finally found a trial that didn’t have the age limit, they had a communication requirement. Jim lost his ability to communicate verbally early on in the disease.

Still, I was confident that I could find the best medical attention possible, and when it became necessary, I tried to find a good home for him. Still, I was vigilant, on top of his medical and personal care. I offered my phone number as their hotline number, day or night.

From time to time, doubt overrode my confidence. On dark days, I would wonder if I was up to the challenge. I second-guessed some of my decisions. At times, I felt like a failure. From time to time resentment battled with fortitude. I mentally beat myself up.

Outwardly, I looked competent, but inwardly, I wasn’t so sure that I could keep on keeping on. When things were going wrong, I would wake up with a cloud hanging over me. I never knew if it was going to rain, or I’d get struck by lightning. It seemed that most of the time, the sun would come shining through. Often, nighttime doubts were simply replaced with daytime confidence.

When I took time to breathe, and think rationally, I realized that I was simply a typical caregiver. In support group, I learned that others had the same doubts I worked my way through.

When Jim first showed signs of dementia, we lived life as normally as we could for as long as we could. We cherished the good times. You know what I remember most from the nursing home years? I remember the walks in the park, the trips to Dairy Queen, the times Jim laughed, the kids and grandkids visiting him, wheeling him around the parking lot on quiet summer evenings, seeing his eyes light up from time to time.

Yes, I remember the little things. Happy moments ramble through my mind like old photographs capable of bringing smiles or tears, or more often—both.