The Trip You Don’t Want to Take 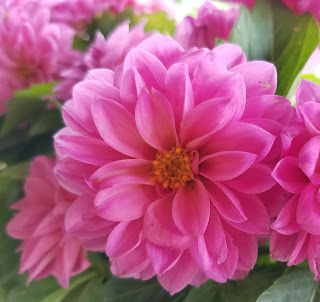 I was carrying my Mother’s day potted dahlia up the deck steps when I tripped on the steps and fell. I smacked my elbow, knee, and scraped my foot.

It was a little shocking to find myself down, but I dusted myself off, moved my limbs without pain. It seemed the only visible damage was a toenail torn halfway off. I was luckier than my sister-in-law who had fallen over the weekend and fractured her hip.

Unfortunately, I had landed on the plant, crushing the plastic pot and breaking off a few of the flowers. We re-potted the plant, and I believe it, too, will recover.

These two falls made me think of all the times Jim fell. As I worked on his memoir Indelible, it became apparent to me that he had fallen more times than I remembered. None of Jim’s falls resulted in broken bones, but he often had bruises, swelling, and cuts that had to be stitched.

Jim’s main problem seemed to be balance. After several falls, he eventually used a merry-walker, a device that looks much like a baby walker for adults. He even managed to flip the merry-walker from time-to-time and the nursing home weighted it down. At one time, he was falling out of bed, so they placed it on the floor.

Up until the last several months of Jim’s life, I was able to take him for walks. I held onto him, and he seemed to do pretty well. Once he began to tilt his head back most of the time, I had more problems keeping him balanced. Eventually, our “walks” involved pushing a wheelchair around the parking lot.

A myriad of problems associated with dementia can increase the risk of falling. Dementia causes problems with balance and gait, confusion, vision and perception, and, of course, the ever present medication.

According to the CDC (Centers for Disease Control and Prevention), nearly 32,000 people died from unintentional falls in 2014. Injuries from falls are the most common accidental death for older adults.

Six out of every ten falls happen at home. NIH (National Institutes of Health) has some suggestions to make our homes safer while we go about our daily activities. Slick floors and poorly lit stairways are two examples of hazards.

NIH lists these factors that can lead to falls: (1) loose rugs, (2) clutter on the floor or stairs, (3) carrying heavy or bulky things up and down stairs, (4) not having stair railings, and (5) not having grab bars in the bathroom.

·         Remove safety hazards. It is easy to trip over electrical cords, clutter, dog dishes, or small furniture. One time as I was knocking down cobwebs, I tripped over a footstool.
·         Improve lighting. Make sure bulbs are bright enough that you can see where you are going. Have a lamp at your bedside, night-lights throughout your home, and keep a flashlight handy.
·         Install handrails and grab bars. Stairs and bathtubs are prime spots for accidents. Having something to hang onto reduces the risk.
·         Move items to make them easier to reach. As a short person, I applaud this idea. Almost everything is out of my reach!

Having a recent fall makes me more aware of the danger. I had a really bad fall on ice one time and my first thought was that I was going to die, my second thought was that I had “broken” my head. Ice is another story for different season. For now, let’s work on those indoor hazards that might catch us unaware.