Memories of Lilacs and April 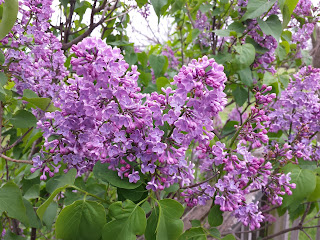 The lilacs are in bloom and every time I walk out onto the deck, I smell them. Lilacs and April are two reminders of Jim. He left this world on April 18, 2005.

The lilacs reminded me of a story Aunt Nita shared at Jim’s services:

“I remember a time a few years ago when Jim and I were sitting in the swing. It was in early spring; we had been talking, but not a lot. Jim got up and said, ‘Aunt Nita, do you smell that?’ He walked over to a big lilac bush and picked a handful. He brought them back to me and said, ‘Smell this, Aunt Nita. Don’t they smell good?’ Remembering Jim, I always do, for I know he is one of God’s chosen few.”

When we were planning Jim’s services, I took a yellow pad up to Virginia’s house and asked everyone to tell me stories about Jim. I wrote the stories down, and I was still typing them when Gary Richardson came to our house to go over the memorial service.

Gary pushed the paper back to me and said, “Tell me these stories.” I told Gary the stories, and he said, “Those are wonderful stories, but if I read them, they are just stories. You lived those stories, and if you tell them, they will come alive.”

Rob and Eric both agreed and said that I should tell the stories. My first thought was that I couldn’t do it, but after more thought and encouragement, I decided I could do it. That is if everyone put on his or her “happy” face.

Some of my favorite memories of Jim involved travel and music. Here are a few of the stories I shared:

Jim’s favorite place to vacation was Estes Park, Colorado, and the Rocky Mountain National Park. We went to Colorado fourteen consecutive years. Jim was happiest when waking up on a cold Colorado morning, making a pot of coffee on the camp stove and cooking breakfast. I loved the cold mountain mornings too, but not quite as much as Jim did. I would snuggle beneath the covers in our bed in the van. Jim would bring me a cup of coffee in bed and sing the sleepy head song to me…

Music was important to the entire Fisher family. Jim was talented and could play the guitar, fiddle, banjo, mandolin—anything with strings. He enjoyed playing music with his dad, uncles, brothers (Bob and Billy) and a good friend, John Cook.

Sometimes music could get the Fishers in trouble and could almost cause fights. One time when Jim was playing his guitar, and Uncle Jewel was playing the fiddle, Billy sneaked up behind Uncle Jewel and goosed him. Uncle Jewel jumped, hit Jim in the head with the fiddle bow, knocked Jim to his knees, and gashed his head open. Uncle Jewel got mad, Jim had a dazed look on his face, and for some reason, Billy, who caused the ruckus, was the only one who thought it was hilarious.

Jim liked to hear Mom and me sing “Mansion Over the Hilltops.” The words describe wanting a mansion, a harp, and a crown.” Jim wasn’t the kind of person who would want a mansion, or a crown, but he would want that harp, because it has strings.

I can just hear Jim playing “Buckaroo” on the harp. I bet Heaven never heard anything else quite like it.