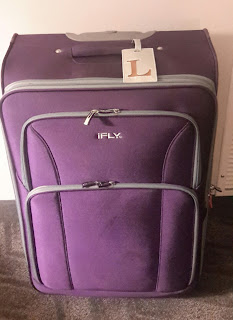 This year marks my seventeenth trip to D.C. to join my voice with fellow advocates at the Alzheimer’s Advocacy Forum.

Essential preparations for this annual journey began on Wednesday with laundry. It seemed that most of the clothing I planned to wear was in need of laundering. Thursday, the packing began and I felt pretty good when I went to bed at midnight. My suitcase was full. Friday morning was going to be easy-peasy. All I had to do was make a few final preparations, grab my bags, and head to the airport to spend the night at a hotel.

The first problem was I shut off my alarm and overslept. I took the dog out and then it was time to sign in to get my boarding pass. My sign in wouldn’t work. I decided to ask for a new password and my security questions weren’t correct. What? I was giving the only answers. After much agonizing, I realized I was entering an incorrect password and once I corrected my error, I was in.

The few preparations turned into hours. I took my PC downstairs to hook into my color printer and it wouldn’t work. I couldn’t figure it out, so Harold came down and after a few manipulations, declared that I didn’t have it plugged in correctly.

I hate it when that happens.

Back upstairs, I prepared to leave—about four hours after my target time.

“Just sit down and relax a minute before you leave,” Harold said. “Otherwise, you’ll forget something important.”

The checklist looked good. Then Harold started asking about this and that...he thinks of everything. Of course, he’s the planner; I’m the seat-of-the-pants person. Eventually, he managed to think of something I’d forgotten.

“What would you do without me?” he asked.

“Go off half cocked all the time,” I admitted.

When I headed out the door, it was raining, and the car clock told me that my timing was perfect to hit Kansas City right at rush hour on a Friday night. Oh, brother.

By the time I reached I-70, rain was pouring and the traffic was pretty well bumper-to-bumper. At one time, I looked in my rearview mirror to see a semi tailgating me. My windshield began to fog, and my wipers were working their butts off to keep the rain from interfering with my vision.

I called Harold for a weather report. “You should be running out of the rain by the time you reach Kansas City,” he said.

The radio was on a country music station and I found the music to be soothing. I turned up the radio and karaoked to my heart’s content. Once again, meteorologist Harold was correct. When I reached the city, the rain cleared just in time for a weird traffic jam on I-435.

Finally, I reached the hotel and everything was better. I checked into a beautiful room and although Harold had told me of all the fabulous restaurants nearby, I ate at the hotel. I was famished and the turkey club with “house” made chips tasted wonderful.

After giving myself a mani-pedi, I decided to make a cup of tea. First problem, no cups. I called housekeeping and that problem was solved.

I was darned ready for a good night’s sleep. After all, the next day was going to be a long one.

After sleeping soundly for a few hours, I woke up at 4:30 and couldn’t go back to sleep. I decided to make a cup of coffee and relax for a while until time to catch my flight. I poured water into the coffeemaker, put Coffee-mate in the cup, and turned it on. The pot stopped gurgling, but when I checked, all I had was hot Coffee-mate water. I had neglected to put in the coffee. Second time, I did everything right except I forgot to turn on the pot. Finally, I sat down with a cup of coffee and decided I would get ready and head to the airport.

After such a rocky start, the rest of the trip would have to be smooth skies. By mid-afternoon, I’d be in D.C. and have a few days to see the sites and spend with my friends. So, I grabbed my purple suitcase and set off for another round of fighting to end Alzheimer’s.