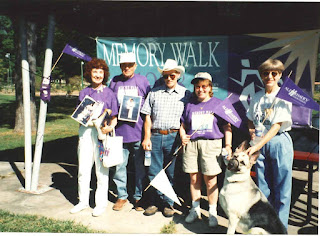 After numerous tests eliminated other conditions, a doctor finally diagnosed Jim with dementia of the Alzheimer’s type. Jim was emphatic that he didn’t have “that.” The doctor that gave Jim the bad news was named Worth, and Jim immediately dubbed him “Dr. Worthless.”

I wasn’t as sure as Jim was that the doctor was wrong. After I contacted the Alzheimer’s Association, I had attended a few support group sessions. When my contact at the Association told me about the Memory Walk, as it was called at that time, I signed up for it and raised $600.

One day he was looking at the newspaper and saw an article about an upcoming Memory Walk in Sedalia. “I have trouble with my memory,” he said, “and I’d like to go to this walk.”

Well. The Big Bad Wolf wouldn’t have had to huff and puff very hard at all to knock me over.

We showed up at Liberty Park on a warm September day in 1998. We quickly discovered that we were the only two people from Sedalia. Still, we walked, and Jim’s Team has walked in every Sedalia Walk since that day.

With this year’s Sedalia Walk coming up in less than two weeks, my thoughts turned to our team name this morning. Jim’s Team—what a natural choice.

Jim’s Team turned out to be so much more than a Walk team. Jim’s Team was really all the people it took to help him, and me, through the dark days of dementia. Jim’s Team was made up of family, friends, co-workers, neighbors, and occasionally total strangers who stepped up to offer a helping hand when it was needed.

Included on Jim’s Team were physicians, nurses and nurses aids, housekeeping, social workers, and, eventually, hospice. Every step of the way, we needed the support and guidance provided by the Alzheimer’s Association.

We needed the prayer team who never forgot us, and the love team who never gave up on either of us. You can never underestimate the “doer” team, the ones that didn’t just offer, “if you need anything,” but instead came up with, “I’ll mow your grass,” or “here’s a cobbler I baked.” What would we ever have done without the companion team—“I’ll drive you to Kansas City for your doctor’s visit,” and “here, I’ll help you get Jim loaded into the car.”

Everyone that stood by us and helped us was a part of Jim’s Team. The core team was immediate family: Jim’s mom and my two sons. They were the ones that helped me make the tough decisions: making it through day-to-day, home care, the nursing home decision, and heartbreaking health care decisions. They had my back at all times.

Jim’s Team held us in their embrace and listened to my rants, dried my tears, and made me laugh when I thought that was impossible. Jim’s Team made all the difference in his and my quality of life.

Jim passed away April 18, 2005, but Jim’s Team continues to walk in his honor and in honor of others lost to dementia. Over the years, Jim’s Team has raised around $50,000.

In less than two weeks, we walk again. In my heart, I’ll remember Jim’s joy during that first Walk. I’ll think about the good times, bury the heartache, and hope that someday soon researchers will find a cure making Alzheimer’s a distant memory.

To join, or donate, to Jim’s Team, click here or on the Walk to End Alzheimer's logo.