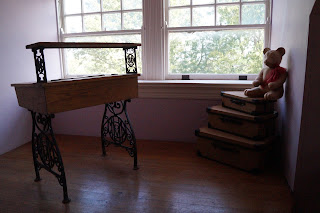 My grandkids are always wanting me to tell them spooky stories. I have several to choose from about my younger days when Jim and I managed to live in some scary places and had strange experiences galore.

It only stood to reason that when my mom, sisters, and I planned a girls’ mini-vacation at  Hannibal, a ghost tour would be on the agenda. In all my extensive travels, I had never visited the town that served as Mark Twain’s inspiration for Tom Sawyer.

We arrived in Hannibal at a good time to take a trolley tour to get the lay of the land. While we were waiting, a “Ghost Tour” sign caught our attention. We strolled inside and signed up for a tour at 7:00 p.m.

During the day, we rode the riverboat and still squeezed in a little shopping. My sisters and I bought vintage hats to wear on the ghost tour.

Our ghost tour guides, Ken and Lisa, asked whether we were more interested in history or ghosts. Our preference was both, so we heard about Hannibal’s rich history and haunted tales. During the tour, we stopped in front of several bed and breakfasts, an old church, and the Rockcliffe Mansion. Ken and Lisa had lived in the mansion and told us chilling stories of their adventures. Doors slamming and footsteps on the stairs would be enough to make me hide my head beneath the covers.

The mansion’s history is unusual. In its time it was the biggest and most opulent mansion in Missouri. Lumber baron John J. Cruikshank chose a spot already occupied by a mansion. He moved the offending house next door and eventually his daughter lived there. After Cruikshank died, his widow moved from Rockcliffe to her daughter’s home leaving nearly all her belongings behind.

Rockcliffe  remained abandoned for 43 years, its windows broken out, and the rite-of-passage for teenagers was to go into the house to the third floor and rip off a piece of the map in the children’s room. I’m sure it was considered a sign of bravery to accomplish this route without freaking out. Although, the mansion’s ghosts are considered to be friendly, Casper-type ghosts, I decided that I wouldn’t want to spend the night there.

Our tour ended with a trip to the cemetery, spooky to be sure. Although I’d visited a cemetery on a previous ghost tour, it was not like this one. The other cemetery was in the middle of Boston and well-lighted. This cemetery was on the edge of town, no lights, and although it had been cleaned up, it was still an old, old cemetery with toppled stones around the fringes. We were furnished with divining rods and tiny two-inch flashlights. I wouldn’t touch the rods after we were instructed how to get yes and no answers because it reminded me of a Ouija board pointer. I’ve had some hair-raising experiences with Ouija boards and didn’t want to be calling up any spirits without Ghost Busters on speed dial.

The next day, after visiting the museum and Twain’s boyhood home, we toured Rockcliffe.  You’ve heard about pictures that have eyes that follow you no matter where you are. Well, there’s one of John Cruikshank that does that. I’m not ashamed to say that’s just a little bit creepy. After seeing the bedrooms, I’m sure I would not have had a restful night had we chosen to stay there. Old clothes, hats, and shoes in the closet made me think the lady of the manor might return to change her clothing.

To finish our journey, we drove into Illinois looking for Burbridge Cemetery where several of our ancestors are buried. We got lost. We finally asked a local and he directed us to it. My sister consulted her genealogy book and we found several graves listed in the book. We took photos and headed for home.

It is always fun to spend time with family. It’s something most of us put aside for the busy, mundane things we do in life. Sometimes, it helps to take a step back and think about how after we’re gone, a stone may be the only visible reminder of our time on earth. Someday, that stone may be part of a ghost tour and a tourist with a divining rod may be asking us yes and no questions. Wouldn’t it be so much fun to groan loudly and say, “Get your big fat foot off my head!”