I Remember So Many Things 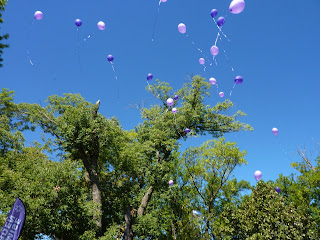 As I signed copies of My Recollections, Our Memories, I heard recollections of a lot of loved ones with Alzheimer’s. One man told me that his mother was in a nursing home in Florida and had all my books. “She reads them over and over,” he said. “She’ll be so happy to have a new one.”

Longtime volunteer, Anna Lee, had recently lost her brother to Alzheimer’s. She had her big smile, as usual, but tears glistened in her eyes as she talked of her loss. They shared their stories, their hugs, their tears, and their hope that someday this disease that brought us together would become a distant memory.

At the conclusion of the Walk, we held what might be our last symbolic balloon release. The company where we’ve been buying our balloons told us that helium is hard to get and they may not have helium next year. As we released the purple balloons, they flew off toward heaven with our messages of love on them.

As I was packing up after the walk and preparing to hustle off to another appointment, my niece, Rhonda, showed me a handmade poster. She had written some of her thoughts about her Uncle Jimmy, and surrounded the words with photos, butterflies, and hearts. She had found several photos of Jim in his denim jacket, one where he is wearing his favorite blue plaid shirt, one in a tux, and yet another where he is wearing a sweatshirt and sweat pants sitting in his recliner at the nursing home.

Rhonda gave the poster to me, and I hugged her as I hustled off to another appointment. Later in the afternoon, I pulled into the Walmart parking lot and took a moment to catch my breath. I picked up the poster from the passenger seat where I had stowed it. As I read her words, I cried for the first time that day.

This is what Rhonda wrote: 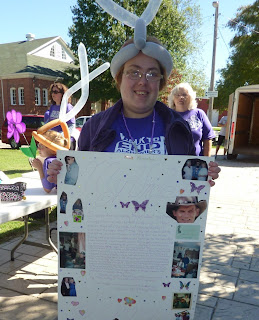 I remember so many things about my Uncle Jimmy. When he and my Aunt Linda lived in their trailer, they had a big black bird that could talk; it was mean to everyone except Jimmy. They had a mean cat too, that bit me, lol.

When they were building their new house, Jimmy had a nervous breakdown and had to go to the hospital. I can remember when I went to see him that he got on one knee with his arms out to me, waiting to give me a big hug.

When the house was finally built, they began working on the basement. There were paint cans everywhere and I was running around and fell. When I fell on the paint can, I busted my nose. Jimmy kissed it and carried me upstairs giving me hugs and kisses, and candy, making it all better. Later he got in trouble for giving me the candy ’cause I left sticky fingerprints all over the hallway walls.

I was sick a lot when I was growing up and had to spend much time in the hospitals. When you’re a kid in the hospital, you don’t know anyone and it kinda feels like you are in outer space. But Jimmy never failed to be there for me. Every time I was in the hospital, he would drive all that way even if he didn’t have an appointment. It always made me feel a lot better to have him there with me.

These are just a few of my many memories of my Uncle Jimmy. I love and miss him very much.

Even though in the end, he couldn’t remember us, we will NEVER forget him.

I couldn’t have said it better myself, Rhonda. Only I don’t think your Uncle Jim ever forgot you, and your visits to him in the nursing home brought smiles and love into his world.

What a touching story about Jimmy. I'd like to think that Uncle Jim didn't forget Rhonda either. Thanks for posting!

Thank you for your comments.