The Colors of Autumn 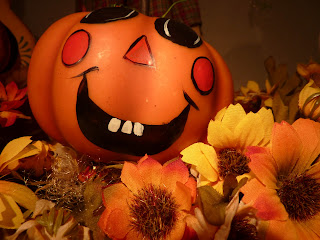 On a drive last weekend, I had my first glimpse of autumn colors. No other time of year is as beautiful as autumn with its hues of blazing orange, yellow, red, purple, and rust. Between the colors and the brisk morning air, I was inspired to begin my autumn decorating. Not satisfied with pulling out my Halloween decorations, I was compelled to go ahead and decorate for that seemingly forgotten holiday—Thanksgiving.

The two holidays blend well together with their autumn tones. I learned a long time ago that when you turn jack o’lanterns to the wall, they look just like Thanksgiving pumpkins. I guess my pilgrims can be Halloween costumes, but I don’t think many kids dress as pilgrims. It just seems to me that the two holidays are related—not as closely as brother and sister—more like first cousins.

With the holidays ahead and the temptation to go overboard on decorations, it may be time to consider whether decorations are in the best interests of a person with Alzheimer’s. If your loved one is in the early stages of the disease, she may be more enthusiastic about holiday decorating than she ever was. He may enjoy handing out candy to trick-or-treaters.

As the disease progresses, decorations and all the hubbub of the holidays may become more of an ordeal than a pleasure. One of the best ways to make life more pleasant for a person with dementia is to avoid change. Holiday decorations can change the look of a familiar place—home.

When Jim was in the later stages of the disease he became agitated and distressed when I started putting away pictures and other decorations that normally sat on end tables and on the bookshelf. One year, he followed along behind me removing the pictures from the storage box and putting them back on the shelf.

It taught me a lesson. Just because it was what I wanted to do did not mean that it was the best decision for that particular time. When he was living at home, it was better to simplify the holidays and  rethink traditions that no longer worked with our situation.

And, guess what? I never felt the least bit guilty about it and it never ruined the holidays. Throughout life, traditions have to be adjusted to each particular era. If a tradition makes someone unhappy, it is time to create new ones.

There’s something about autumn harvest that says it is time to benefit from the hard work that came before. It is time to store up for the frigid weather ahead when winter brings the beauty of the snow and glistening ice tinged with the dangers of wind chills and treacherous roads. Aw, time marches on, and we always have the unique beauty, and excitement, of the seasons ahead.

http://earlyonset.blogspot.com
Posted by L S Fisher at 11:03 AM

Email ThisBlogThis!Share to TwitterShare to FacebookShare to Pinterest
Labels: Alzheimer's and decorating for holidays, autumn, Thanksgiving the forgotten holiday