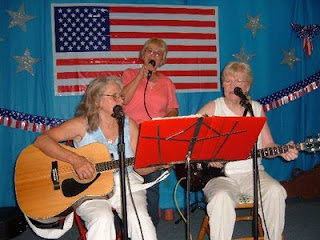 Music stimulates our memories and unveils feelings we thought we had forgotten. Have you ever noticed how a song can bring back a flood of emotions? A familiar melody can take us back in time, and although our physical appearance might shriek middle-age, our emotional age is the era of the song.

If you don’t think music can transform you internally, pay attention to the songs that give you happy feet. Even if your body isn’t up to the dance moves of your youth, your heart hears the music and your feet want to dance.

Throughout the years of our marriage, Jim played his guitar nearly every morning. He called it his therapy. At work I often listen to KDRO radio, a local station that plays country music and almost every song makes me think of Jim. One of the saddest things about dementia was when Jim began to have trouble playing his guitar. One day he asked me to tune his guitar. Jim, the man with perfect pitch, wanted tone-deaf me to attempt something I had never done in my life. I knew his request was beyond my abilities, but I called his brother and he took care of it.

Music has been a family tradition in my mom’s family. I grew up thinking that all normal families played guitars and sang. On Saturday nights my mom and her brothers, neighbors, and friends sat on wooden kitchen chairs and played music for hours. On those Saturdays at Grandma and Grandpa Whittle’s house, my Aunt Venetia always sang my grandma’s favorite gospel songs.

My mom, Aunt Labetta, Jimmy (my brother), cousin Reta, and Gene Branch play music at the nursing home one Saturday a month. Recently, I dropped by Good Shepherd Nursing Home in Versailles to listen to the music. I wound my way through the halls to the dining room where they were set up on the stage. Several residents tapped their toes and sang along with the songs they knew. At the front of the room, my Aunt Venetia sat dozing in her wheelchair while my cousin Jan attended to her. 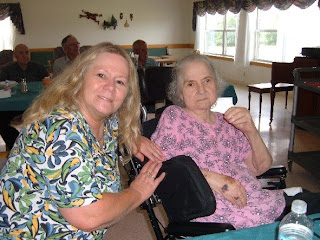 My mom and Aunt Labetta, as always, dedicated a special song to their sister-in-law. Aunt Venetia is in the late stages of Alzheimer’s, yet she perks up when she hears the music she’s loved her entire life.

When Jim was in the nursing home, his favorite channel was GAC. His eyes were glued to the set when his favorite entertainers performed. His foot would tap in time to the music that he once effortlessly played.

With the special bond music has to our memories, it is no wonder that eyes sparkle at certain songs. Sometimes the sparkle is caused by unshed tears, but often it’s just memories dancing in our brains that bring life to our eyes.
Posted by L S Fisher at 7:24 AM