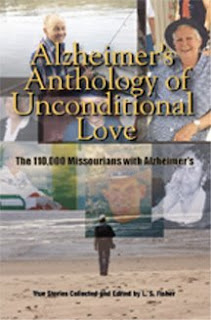 Invites YOU to a Book Signing

A Voice for Missourians with Alzheimer’s

In Missouri, an estimated 110,000 people have Alzheimer’s or a related disorder. Caregivers, family, and friends bring the number of Missourians directly impacted by the disease to more than a half-million.
Alzheimer’s had never affected anyone close to me until my husband Jim began his downward spiral into the abyss of dementia. A diagnosis of Alzheimer’s is frightening and the prognosis is devastating. Alzheimer’s has remained a mystery, the cure illusive.
How could Jim have dementia when he was only 49 years old? The concept was unfathomable that small mental glitches could escalate into massive cell death that would erase my husband’s memory and skills. Jim once repaired our van with a piece of baling wire, but two years into the disease he could not focus enough to screw in a light bulb, twisting it first one way and then another.
Jim was a talented singer and musician who could play a multitude of stringed instruments. Eventually he could not play his guitar, and his voice was stilled by aphasia.
Alzheimer's Anthology of Unconditional Love is a collection of stories that give a voice to Missourians who have experienced this life altering disease. When our loved one has dementia, we embark upon an unwilling journey into an uncharted world. It is the death of our dreams, our plans, and the birth of unconditional love. Alzheimer’s brings about role reversals as we struggle to provide care for people who once took care of us.
The stories in the collection capture the effect Alzheimer’s has on caregivers, sons, daughters, in-laws, children, grandchildren, and healthcare workers. The writers range from a Pulitzer Prize nominee to unpublished authors.
Tracy Mobley, diagnosed at 38, wrote a story filled with humor and laced with the tragedy Alzheimer’s has brought to her family. Charles Schneider describes the shock of being diagnosed with early onset Alzheimer’s.
For those beginning the journey, these true slice-of-life stories will help them realize they are not alone. We all walk together, holding hands, giving each other hugs and encouragement.
I look forward to seeing you April 13 at the Columbia Barnes and Noble Bookstore.